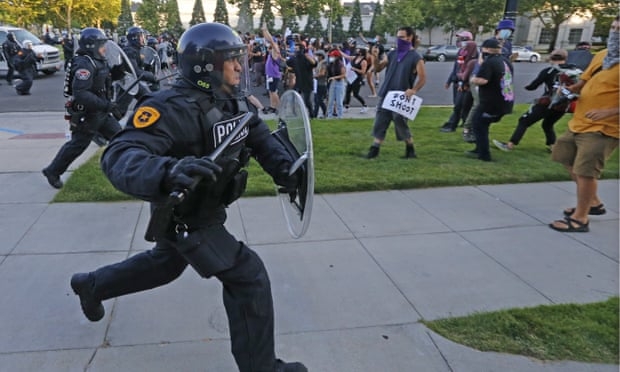 Big corporations accused of driving environmental and health inequalities in black and brown communities through toxic and climate-changing pollution are also funding powerful police groups in major US cities, according to a new investigation.

Some of America’s largest oil and gas companies, private utilities, and financial institutions that bankroll fossil fuels also back police foundations – opaque private entities that raise money to pay for training, weapons, equipment, and surveillance technology for departments across the US.

The investigation by the Public Accountability Initiative, a nonprofit corporate and government accountability research institute, and its research database project LittleSis, details how police foundations in cities such as Seattle, Chicago, Washington, New Orleans and Salt Lake City are partially funded by household names such as Chevron, Shell and Wells Fargo.

Police foundations are industry groups that provide substantial funds to local departments, yet, as nonprofits, avoid much public scrutiny.

The investigation details how firms linked to fossil fuels also sponsor events and galas that celebrate the police, while some have senior staff serving as directors of police foundations.

The report portrays the fossil fuel industry as a common enemy in the struggle for racial and environmental justice. “Many powerful companies that drive environmental injustice are also backers of the same police departments that tyrannize the very communities these corporate actors pollute,” it states.

The report included such companies as: Chevron, a multinational oil and gas company, that is among the world’s top 25 polluters. In the US, it owns two of the worst six benzene-emitting refineries, according to the EPA. Chevron is a corporate sponsor of the New Orleans police and justice foundation, as well as a board member of the Houston police foundation and sponsor of the Houston mounted patrol. It also donates and serves on the board of Salt Lake City police foundation.

Shell is one of the biggest fossil fuel companies in the world, and is currently building a huge ethane cracker plant near Pittsburgh, which advocates warn could turn Appalachia into the next so-called Cancer Alley – a corridor of Louisiana refineries, where Shell is also a major polluter. Shell is a “featured partner” of the New Orleans police foundation and a sponsor of the Houston police’s mounted patrol.

The nation’s largest oil refining company Marathon Petroleum has long been accused of generating pollution that disproportionately affects the health of black and brown communities. Its refinery in Detroit has received 15 violations from the state environmental regulator since 2013. Marathon’s security coordinator is on the board of the Detroit police foundation, and sponsors numerous events.

Carroll Muffett, the president of the Center for International Environmental Law, said: “This report sheds a harsh light on the ways police violence and systemic racism intersect with the climate crisis.”

A spokeswoman for Chevron said the firm is a “good neighbour” wherever it operates. “Across the world, Chevron invests millions of dollars and thousands of volunteer hours on numerous programs and partnerships, helping communities improve their lives, achieve their aspirations and meet their full potential.”

Marathon Petroleum said: “It is our privilege to satisfy the [Detroit] community’s direct requests for more local neighbourhood patrols by first responders, through our own contributions and support for fundraising efforts.”

The revelations come as the coronavirus pandemic continues to expose gaping disparities in air pollution, access to clean running water, and rates of chronic medical conditions which have contributed to a disproportionate number of deaths among people of colour and Native Americans.

Meanwhile, Donald Trump is deploying militarized security forces to cities such as Seattle and Chicago to quell anti-racism protests amid growing public demands to relocate some police funds into environmental, health and social services, to create safer, healthier and racially just communities.

“Racism was stamped into America’s DNA. America is segregated, and so is pollution.”

Police foundations play an increasingly important role in local policing. Law-and-order advocates say they have stepped in to fill budget shortfalls and ensure police departments are equipped with state-of-the-art technology and weaponry needed to combat crime in the 21st century.

But critics argue police departments are already overfunded. Nationwide about $100bn is spent on policing each year, and cities hand over 20% to 45% of their general budgets to police departments, according to advocacy group the Center for Popular Democracy Action.

Police foundation money is additional, and this money is much harder to trace since they are not subject to the same transparency rules as public entities such as law enforcement agencies.

Aside from fossil fuel firms, utility companies were also highlighted in the report as playing a dual role as polluters and backers of police foundations.

America’s 100 largest utilities accounted for 80% of measurable air emissions, according to a 2019 report. Low-income African American communities disproportionately suffer health problems such as respiratory and cardiovascular disease, and face a higher risk of death from the fine particulate emissions that come from power plants, according to researchers at the University of Washington and Stanford.

Exelon, a publicly-traded energy company headquartered in Chicago, is the nation’s largest utility, and in 2019 agreed to pay $200m over 50 years to settle a lawsuit over pollution in Chesapeake Bay.

According to the report, Exelon is a prolific donor to police foundations where it and its subsidiaries operate, giving to foundations in Baltimore, Philadelphia, Chicago, and Washington.

A spokeswoman for the company said Exelon is the country’s largest producer of carbon-free energy which financially supports programs and organizations targeting diverse communities. “A fraction of our total giving went to police departments through small, safety-focused grants for things such as crash investigations, emergency scene safety improvements, K-9 search and rescue operations, and other programs.”

Financial institutions – public-facing banks, insurance companies and asset managers – are also some of the biggest sponsors of police foundations.

Wells Fargo is the second biggest global bank behind fossil fuels, and provided almost $198bn of financing for oil and gas between 2016 and 2019. The bank’s ties to police foundations include two board seats and a sponsorship deal with Charlotte-Mecklenburg. It is also a partner and donor to the Seattle police foundation, a director and sponsor of the Atlanta police foundation, and donates to Salt Lake City’s.

Wells Fargo did not respond to request for comment.

“From policing to financial violence – the road to solving the climate crisis includes addressing connected predatory systems. We support the demand to defund and divest from the police and fossil fuels, and to reinvest in the resilience of people and planet for a just recovery,” said Tamara Toles O’Laughlin, 350.org’s North America director.