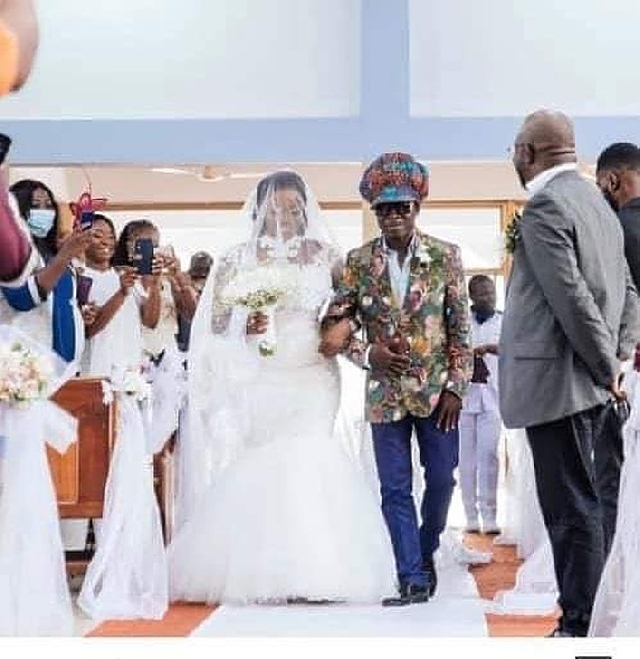 Kojo Antwi walked his die-hard fan down the aisle

A die-hard fan of music legend Kojo Antwi had a wedding full of memories and bliss as the maestro ushered unto the altar during her nuptials.

The bride, identified as Efia Antwiwaa Kajah, offered to have the Music man perform a task that would have been done by her father, traditionally.

However, Efia, a staff of one of the telecommunication companies in Ghana, demanded that her father delegate the role to the ‘Mmrika’ hitmaker in fulfilment of her long cherished dream.

Efia Antwiwaa tied the knot with Lieutenant Commander Solomon Dayira of the Ghana Navy, at the Arakan Methodist-Presby Church, Burma Camp in Accra on Saturday, August 22, 2020.

According to her, she started following the exploits of Kojo Antwi and his music at age 13 while in junior high school and has since been an ardent fan of ‘Mr. Music Man’, playing and enjoying his songs at all times, adding that, she adopted the female version for Antwi as a result.

“I got so addicted to his songs, especially ‘Nipa a Odo Me’, and personality that I resolved to have him take me to the altar when I was ready to marry, and go on and name my male child after him.

“My father, Mr. Kwadwo Asare Kajah, graciously agreed to my wish and gave that honour to my mentor,” she said.

Describing Kojo Antwi as an affable and down-to-earth person, she expressed her gratitude to him.

“He did all these for me without taking a dime, and I’m eternally grateful to the Maestro for this beautiful gesture,” she noted.