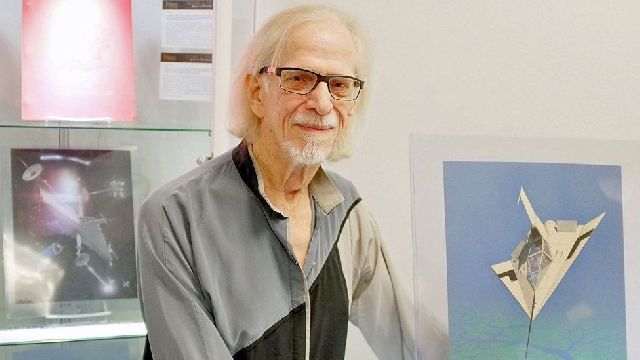 Colin Cantwell, the artist who designed many of the spacecraft in the Star Wars films, has died at the age of 90.

Cantwell's cousin Shannon Eric Denton said he "brought a lot of joy to the world with his art".

Denton added on social media: "And for all of us that knew him he brought a lot of joy being himself."

Cantwell, who also came up with the original design for the Millennium Falcon, was "an incredibly kind human and smart in ways most people dream of", Denton wrote.

Cantwell was born in Colorado in 1932 and gained a degree in animation before going on to study architecture.

During the 1960s space race between the US and Russia, Cantwell worked at the Jet Propulsion Laboratory and Nasa, helping the American public to better understand the flights.

This led to him working alongside TV journalist Walter Cronkite during his historic Moon landing broadcast in 1969, providing a link between him and the astronauts.

Cantwell's interest in both architecture and space saw him prosper in Hollywood, where he worked in special photographic effects for 2001: A Space Odyssey, helping to create the film's dramatic space opening scene.

Star War director Lucas then recruited him, alongside other designers like Ralph McQuarrie, to help create initial models for the original 1977 film.

'A strange kind of joyous'

"The beginning of the film after the scroll, the ship coming by was like one giant dart," Cantwell explained in an interview. "It kept coming and it kept coming.

"This is what had to compound itself in the first half-hour of the film," he added. "It had to be all so absurd and different and insanely joyous and perilous that the audience wouldn't leave. They would want to be in it. The first half-hour had to be extraordinarily successful and beyond reason.

"It had to be a strange kind of joyous. It is all the impossibilities that are playing together, and that is what makes it Star Wars. It is so many layers that the different characters showed that they are different but doing this giant parody at the same time."

Cantwell also worked on technical dialogue for Steven Spielberg's Close Encounters of the Third Kind, was a computer graphics design consultant for WarGames in 1983, and wrote two sci-fi novels.

His long-time partner Sierra Dall confirmed to The Hollywood Reporter that he died at his Colorado home on Friday.

She posted her own tribute online shortly before his death. "I have been so lucky to be able to spend 24 years with this amazing man," she wrote. "We have travelled the world together and made many wonderful friends.

"I will try to preserve his legacy as best I can."