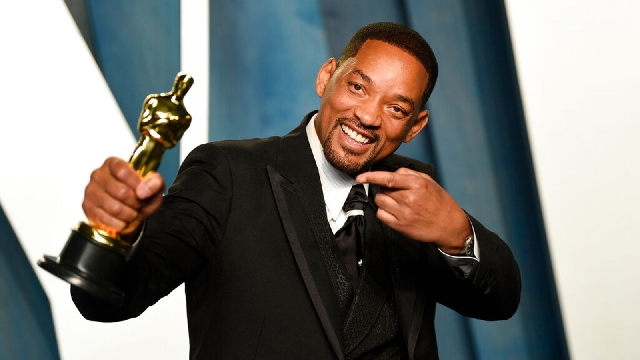 Actor and musician Will Smith

Will Smith said his "deepest hope" is that his infamous Oscars slap does not see the crew behind his new film "penalised" in the upcoming awards season.

The Hollywood actor said he understood if people were "not ready" to have him make a comeback at the 2023 awards circuit.

During the annual awards show in March, Smith stormed onto the stage and slapped host Chris Rock after the comedian made comments about his wife, Jada Pinkett Smith.

Although he later apologised to Rock and the Academy, he was personally banned from any Academy events or programmes for 10 years.

Emancipation is Smith's first big-screen project since the incident.

Asked what he would say to those who thought it was "too soon" for him to be making a comeback, he told Washington DC's Fox affiliate, Fox 5: "You know, I completely understand that if you know someone is not ready.

"I would absolutely respect that and allow them their space to not be ready.

"My deepest concern is my team."

"The people on this team have done some of the best work their entire careers, and my deepest hope is that my actions don't penalise my team."

Smith added that he hoped that "the material power of the film" as well as "the timeliness of the story" would "open people's hearts" and allow the hard work done on the film to be appreciated.

Emancipation is based on the true story of the enslaved man "whipped Peter" who escaped from a Louisiana plantation in the 1860s after he was nearly whipped to death.

When photographs of his bare back, heavily scourged from the overseer's whippings, were published worldwide in 1863 the abolitionist movement was provided with proof of the cruelty of American slavery.

The film premieres in cinemas on 2 December and will appear on the streaming service Apple TV+ on 9 December.