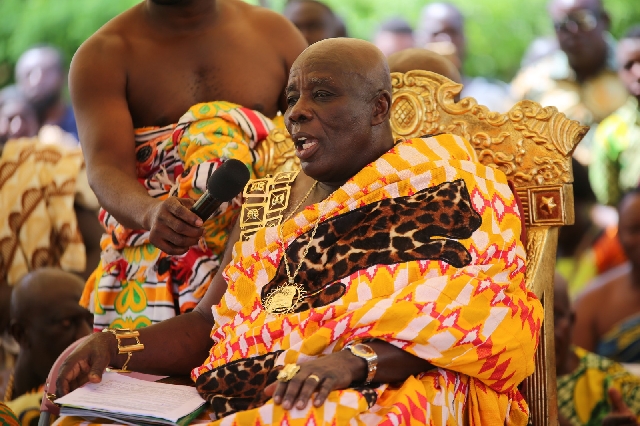 Okyenhene Osagyefuo Amoatia Ofori Panin has given a two-week ultimatum for all alien shrines within his jurisdiction to be closed down.

The paramount chief of the Akyem Abuakwa traditional area said he found it necessary to take the action to stem the provocative spectre of mushrooming alien shrines belonging to fetish priests with no clear social ties and identity, who are mainly from neighbouring countries.

He said it is a violation of Akyem Abuakwa customary laws. Such shrines, he said, are mired in ritual murders, fake currency racketeering and other violent criminal activities.

A statement from the office of the Okyenhene said: “It has been observed that over the past decade, there has been an unperfected influx of immigrant ritualists guised as traditional priests, who have abused the hospitality of Okyeman and engaged in activities that threaten the lives of residents, social order and the health of the national economy”.

“It must be stated that although the acquisition of land and landed property is permitted for non-subjects of the Ofori Panin Stool, it is strictly forbidden for migrant traditional rulers and traditional priests to invoke alien rituals and purport to exercise customary authority, which is the sole prerogative of Nananom of Akyem Abuakwa. For the sake of clarity, alienation of land does not confer jurisdictional authority on the alienee and further the performance of unregulated ritual activities,” the statement added.

It is recalled that the police, on 21 April 2020, arrested fetish priests Christian Gameli Lawerh, alias Power, 36; and Famous Adorkunu, alias Scorpion, 37, both of whom are from the Volta region but reside at Maame Dede near Adeisu.

On April 29, both suspects admitted to having interacted with a missing person who they shot and killed on 15 January 2020, at their shrine.

The suspects reiterated that the deceased was buried at a particular spot within the shrine and led police to the scene.

The area was secured for an exhumation order to be granted by the court.

After a search was conducted at their residences, police retrieved two pump action guns, a single-barrelled gun together with eleven packets of cartridges from Lawerh’s room.

According to Okyenhene Osagyefuo Amoatia Ofori Panin, the Adeisu incident is not an isolated one. “It, however, authenticates several reports and complaints received by the Ofori Panin Palace, and exposes the gravity of the situation.”

In defence of greater public interest, the Osagyefuo has ordered the following:

1.   That all alien shrines be closed down within two weeks from the date of this public statement.

2.   An immediate end to all customary rituals alien to Akyem Abuakwa custom

3.   By this notice, Osagyefuo requests the Ghana Police and other Security agencies to institute formal measures to intensify and broaden investigations to ritual murders and other criminal activities mentioned earlier.

4.   In relation to the above, background checks must be made on all migrant fetish priest and their assigns.

5.   Retrieval of all ammunitions to ensure the safety of lawful citizens.

The Okyenhene further ordered all chiefs in Akyem Abuakwa not to lease lands to immigrant traditional priests and their associates.

He added that any chief, irrespective of rank, who, under whatever circumstance, leases land for shrine purposes, will face immediate destoolment and other related sanctions.