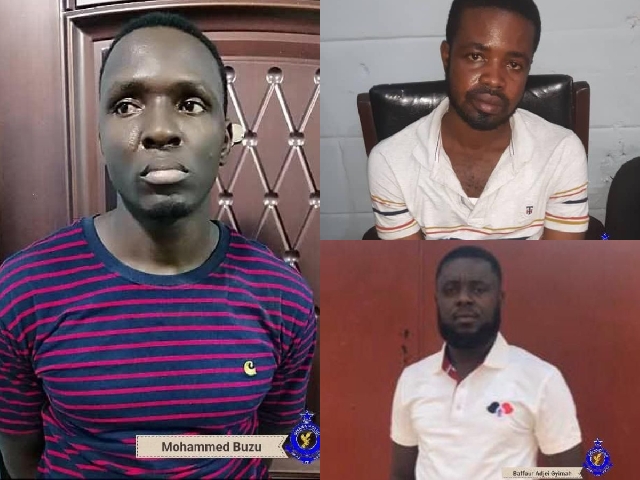 A notorious armed robbery suspect, Mohammed Buzu, 29, has been arrested from his hideout at the Kwame Nkrumah Circle by officers of the Criminal Investigations Department of the Accra Regional Command.

Buzu was arrested in connection with a break-in at the residence of the IMF Country Director and robberies at the residences of the Ambassador of Kuwait to Ghana and a Lebanese businessman in Ghana.

The police say they retrieved assorted visa cards, wrist watches, mobile phones, bag packs, a diplomatic card issued by the government of Ghana and a driver’s licence issued in Virginia, USA, both bearing the name of the wife of one of the victims; passport-size photographs of  white male and female adults and many more items from the suspect’s place of abode at Dansoman, Accra.

According to the police, Antwi is a receiver and sponsor of Buzu’s robbery escapades while Gyimah is a receiver.

All three suspects have been remanded into police custody by the circuit court in Accra presided over by Her Honour Mrs Rosemary Baah Torsu.

The suspects are believed to be connected to other crimes committed at some residences at the Cantonments and North Ridge in the national capital as well as other affluent areas.