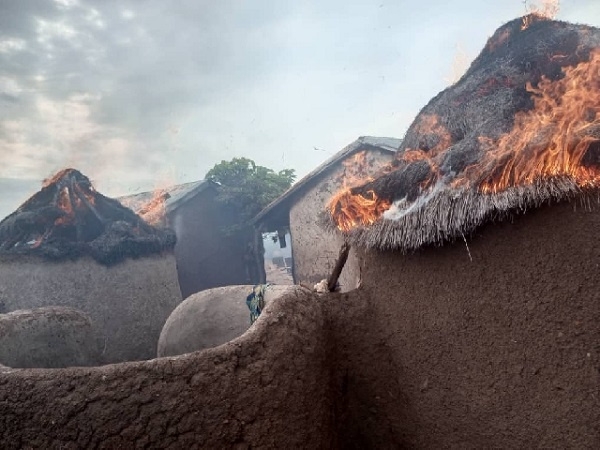 The suspects set houses ablaze during the clash

Following separate communal clashes on the 25th of July 2022 in the Gbalo and Kukpong/Sagong communities in the Chereponi District of the North-East Region, the police, through an intelligence-led operation during the wee hours of the 24th of August 2022, have arrested 12 persons for their involvement in the clashes.

The clashes, which happened a month ago, led to the burning down of 16 houses and the killing of livestock.

The intervention of the police led to the saving of lives and restoration of calm in the affected communities.

The police administration has commended the North-East Regional Police Commander, DCOP Mr Moses Ali Kpeachi and his team for their efforts in restoring calm and gathering intelligence, leading to the arrest of the key suspects behind the clashes.

The suspects will be arraigned today.

The police urged citizens to choose dialogue rather than violence in resolving differences.