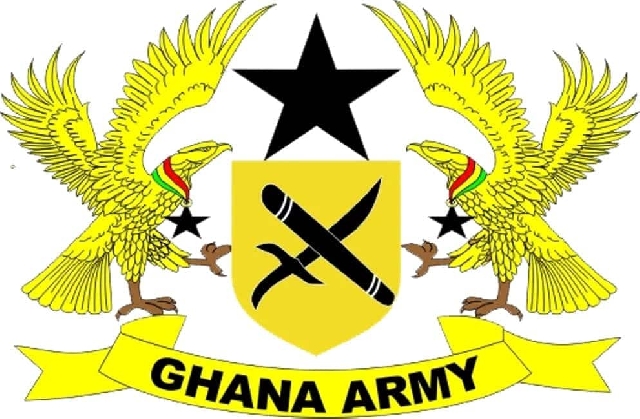 The Ghana Armed Forces (GAF) has described as premature, reports that three of its men have been arrested for robbery.

The three soldiers were allegedly arrested by the Amasaman police command at Nsakina on 4 June 2022.

The police report indicates that the four suspects scaled a wall into the residence of the complainant and robbed him and his friends of 8 different mobile phones and forcibly made them transfer an amount of GH₵850 to a registered MTN number bearing the name Gabriel Yinsabilik.

Preliminary investigations led to the identification of the three army personnel, who were later arrested by the military police and handed over to the criminal investigations department of the Amasaman district police command.

The three suspects were cautioned and released to the military police to be reporting periodically while the investigation continues.

Their accomplice, Malik, has confessed to the crime.

In a statement, however, the Ghana Armed Forces said no such arrest was made.

It noted that the issue is still under joint investigation with the police and, thus, wondered why pictures of the three men have been leaked to the media for publication.

The Ghana Armed Forces (GAF) has monitored a misleading story in the Thursday, 16 June 2022 edition of The Chronicle, with a banner headline falsely stating that three soldiers have been arrested by the Amasaman police for robbery on Saturday 4 June 2022.

GAF wishes to state categorically that the police has not made such an arrest.

Though pictures of some three soldiers were depicted alongside the said story, the allegation of robbery has not been established against them.

It is, therefore, premature for such conclusions to be drawn and for their pictures to have been put in the public domain.

It must be placed on record that following a complaint made by a Nigerian national and also based on a request by the Amasaman police, GAF, through a picture, was able to identify one soldier and subsequently two colleagues who happened to be at Amasaman on the said date.

They were invited by the military police on Friday, 10 June 2022, to assist in investigations into an initial claim of seizure of phones, extortion and forced entry into a premise at Nsakina.

Based on this, the military police and civil police commenced a joint investigation into the allegations.

It is in view of this that the military police escorted the three soldiers to the Amasaman police station where they were compelled to avail themselves for their photographs to be taken, as part of a routine investigation process.

However, these pictures have been released to The Chronicle and into the public domain alleging they were engaged in a robbery when that fact has not been established.

From preliminary checks by the military police, the soldiers, one of whom has relatives in the area prone to robbers, claimed they monitored suspicious movements in a particular house while on a visit.

They proceeded to the house and were ushered in willingly by an occupant.

Upon entry, they noticed some Nigerians busily working on laptops.

The leader of the group denied involvement in cyber fraud or any criminal activity but expressed readiness to report any such acts to the security services and, therefore, requested the mobile number of one of the soldiers.

The allegation that the soldiers scaled a wall to seize mobile phones, made by the Nigerian, and as to whether the soldiers really extorted monies have been refuted by the soldiers.

It is, therefore, unclear the motive of the haste in releasing such information with pictures into the public domain on a yet-to-be-determined matter.

The Ghana Armed Forces reiterate that it does not condone any such acts and wishes to assure the public that it will not shield any soldier engaged in any criminal activity.

However, it is prudent that the media and other stakeholders follow due process for the veracity of claims to be made to ensure accurate information is published.

GAF, therefore, wishes to urge The Chronicle and other media partners that its doors are open for the necessary clarification to ensure a balanced reportage at all times.