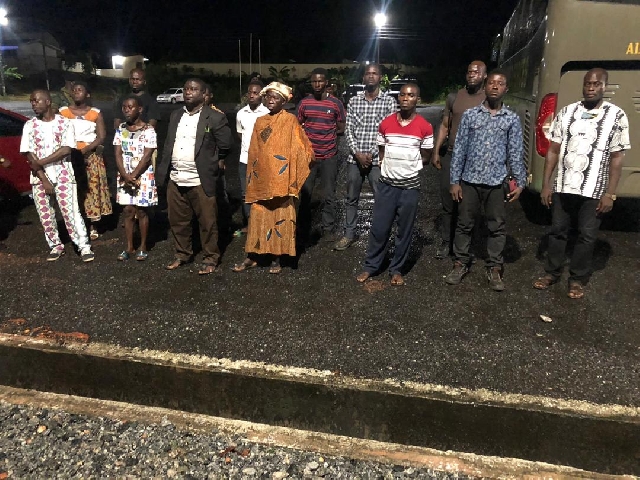 Members of the separatist group

Some 14 persons believed to be members of separatist group Home Land Study Group Foundation, which is championing the independence of the Volta Region, have been arrested by the 66 Artillery in Kpando-Aziavi.

According to the Second in Command at the 66 Artillery Regiment in Ho, Major Jalali Deen Ibrahim, the security forces busted the 14 separatists upon a tipoff in the early hours of Saturday, 30 May 2020 from the Bureau of National Investigation (BNI) and the Defence Intelligence that some members of the group were having a secret meeting in Aziavi, a community in the Kpando Municipality.

"We got information that some members of the Home Land Study Group Foundation were holding a meeting at Kpando-Aziavi and, so, immediately we got this information from the BNI and Defence Intelligence, we teamed up with them. I sent about three patrols out to go and verify; andm if it's true, take the appropriate action and lo and behold, they went and met the people having their meeting and, so, they picked them up. The number was more than what we have here, but obviously some managed to escape but we got 14 of them, out of the 14 are three females and 11 males," he told journalists after the arrest.

Major Ibrahim further noted that they have retrieved some documents from the meeting which show that the Foundation has plans to operate within Volta and the Oti regions.

"We had some evidence, some documents of intelligence and military value; very important documents which show their intentions and plans. And, so, we have picked those ones out…this is a meeting to strategise to plan on how they are going to carry out their activities in the Volta and even the Oti region", he said.

The culprits have been sent to the Volta Regional Police Headquarters in Ho, together with the documents for further investigations.