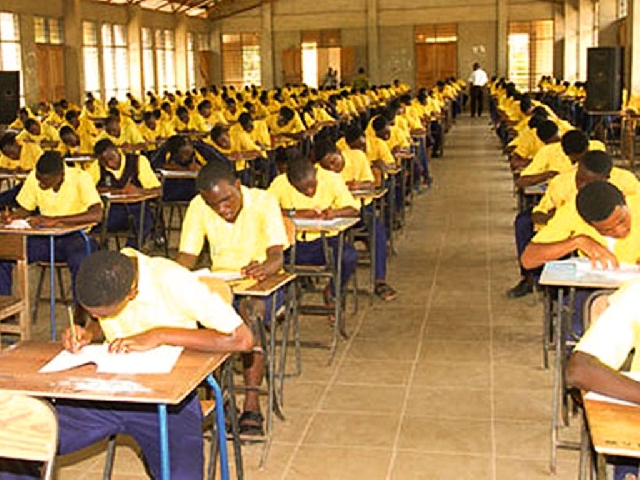 Some students sitting the exam

The West African Examinations Council (WAEC) has said in a statement signed by its Head of Public Affairs, Mrs Agnes Teye-Cudjoe, that some alleged leaked papers making the round on social media are all fake.

“The attention of WAEC has been drawn to the circulation of several fake versions of the Integrated Science 1 & 2 papers to be administered on 3 August 2020 on social media platforms”, the statement said.

The Council said it “wishes to allay the fears of all stakeholders, especially the candidates about the alleged leakage of the papers”.

It noted that a “scrutiny of the images being shared on social media indicates, once again, the activities of certain individuals, mainly operators of rogue websites and WhatsApp groups aimed at leading candidates astray and discrediting the Council”.

WAEC said it “is very vigilant and has alerted the Bureau of National Investigations (BNI), the Criminal Investigations Department (CID) of the Ghana Police Service and the National Security Secretariat “about the threats posed by these groups”.

“The Council assures all its stakeholders that it has put in place all the necessary measures to ensure the smooth conduct of the WASSCE for school candidates”, the statement added.

This year’s West African Senior School Certificate Examination (WASSCE) will start today, Monday, 3 August 2020, with a total of 375,737 candidates in over 796 examination centres across the country.

The Ashanti region had the highest number of candidates, 87,295, followed by Eastern region with 56,467 candidates.

In the Northern, Savana and North East Regions, 24,830 candidates are expected to sit the examination with 14,105 being males.

The Western and Western North regions has 24,332 candidates with 12,601 females.

The candidates are from 641 public and 335 private schools.

Depending on their courses, the candidates are expected to write four core subjects and three other electives.

The examination is expected to end on 5 September 2020.