Two persons have been arrested

Two persons have been arrested by the Criminal Investigations Department (CID) of the Ghana Police Service in connection with the demolition of a building near the Nigerian High Commission in Accra. 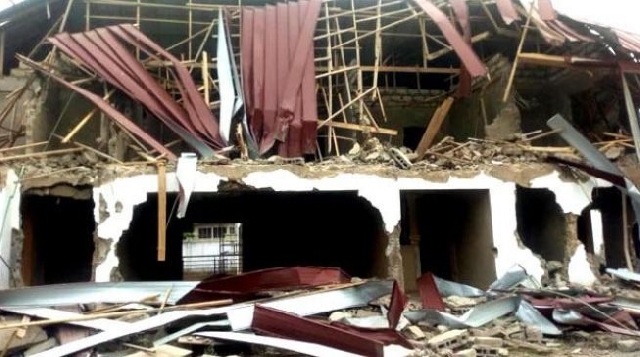 The Nigerian government said the property belongs to its Mission in Ghana.

President Akufo-Addo has apologised to Nigeria over the incident and instituted a probe into the demolition.

A statement released by the CID on Wednesday, 24 June 2020 and signed by its Head of Public Affairs, Deputy Superintendent of Police (DSP) Juliana Obeng, indicated that two persons have been arrested.

“The Criminal Investigations Department, in the course of its investigation on Monday, 22 June 2020, arrested two persons involved in the demolition of a building on the premises of the Nigerian High Commission in Accra.

“The suspects involved in the act have been charged with the offences of conspiracy to commit crime, to wit; unlawful entry and causing unlawful damage contrary to sections 23(1), 152 and 172(1b), respectively, of the Criminal and other Offences Act, 1960 (Act 29) and will be arraigned,” the police said.

The CID further urged the public to “remain calm and continue to assist by furnishing the police with timely and factual information.”

Meanwhile, the Osu Traditional Council has laid claim to the parcel of land on which a structure purported to belong to the Nigerian High Commission was pulled down.

According to the Osu stool, the owner of the property trespassed, adding that several attempts to prevent him/her from developing the land had proved futile.

The Osu stool said in a statement that it has title to the parcel of land in question, which, it noted, is separate from that which is currently being occupied by the Nigerian High Commission.