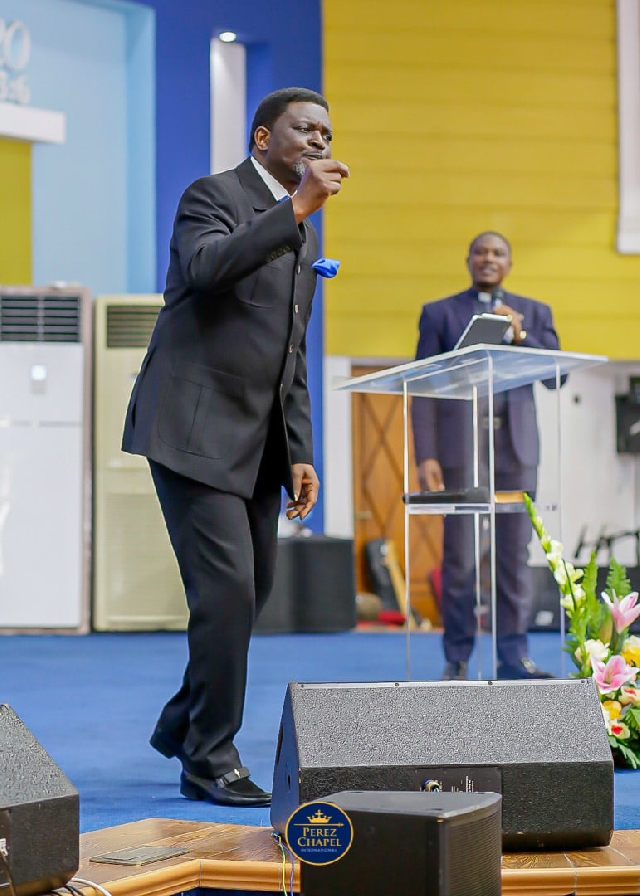 Bishop Charles Agyinasare has urged married couples to do away with taking a hard stance on issues, being selfish and self-pitying among others, so as to safeguard their union. The Presiding Bishop of Perez Chapel International gave the advice when he taught his congregation about conflicts in marriage and how to put out such fires on Sunday, 9 August 2020.

He observed in Part One of his 'Putting Out the Fire' or 'Dealing with Conflict' series that some couples are just tolerating their marriage but not enjoying it while some people think that marriage is a contract-type of agreement which can be kept or broken. 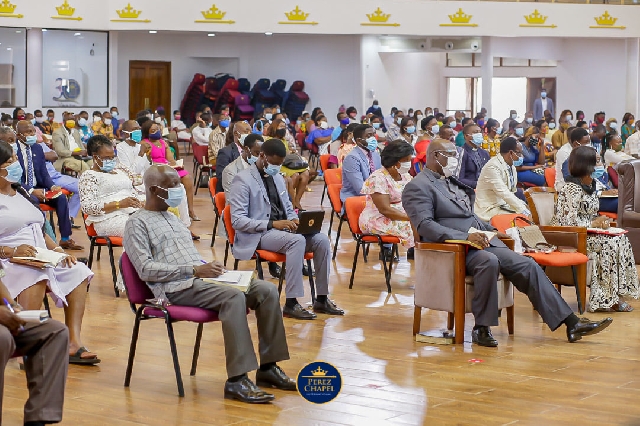 Rather, he said marriage is a covenant. “Are you still married just because Christians shouldn’t divorce?” he asked, adding: “There some people who are in a relationship because it is ‘wrong’ for a Christian to divorce”. 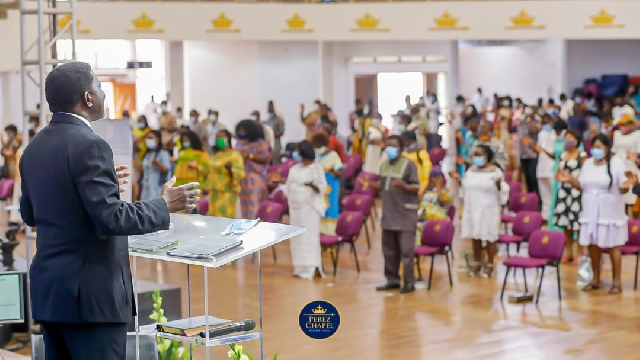 “Marriage should be enjoyed”, he said.

The Bible, he pointed out, recognises marriage as an important institution of God as written in Matthew 19:6, which says: ‘So then, they are no longer two but one flesh. Therefore, what God has joined together, let not man separate’.” According to him, once people marry, they are seen as joined together by God, noting that it does not have to be in a church room for it to be something put together by God.

“Whether it was a local one or an European one, it is marriage in the sight of God”, he said, adding: “Once the two families have agreed and a dowry has been paid, it is marriage before God”. 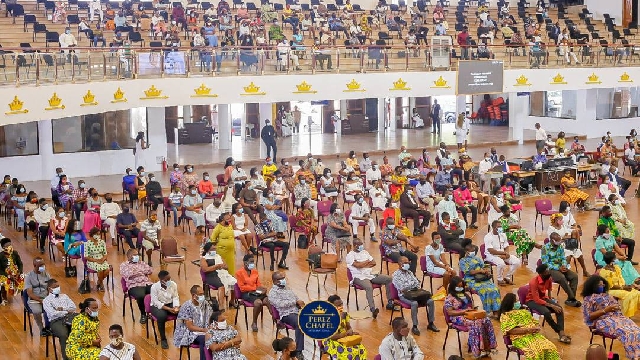 He, however, noted that a marriage can only survive in a home, pointing out that “some people have a house and not a home”. A home, he said, starts with a husband and wife and if possible, children. It must be filled with the peace and joy of the Lord.  “A home is where a husband and wife live under God and if they have children, they raise them up in the fear of God with love. A good home or family is what grooms children to fit into the society to play their part. The home is what starts the formation of the character and habits of children”. 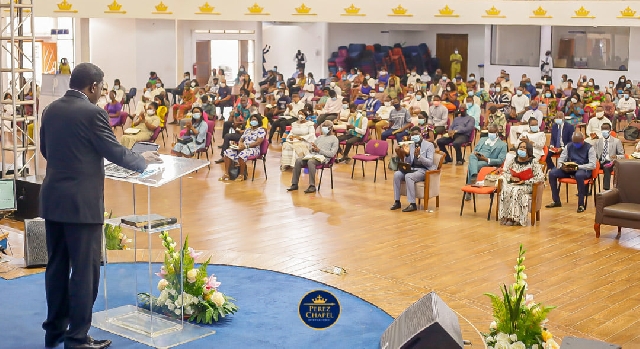 The founder of Perez Chapel International noted that being a union of two people, it was inevitable that every marriage goes through conflict. 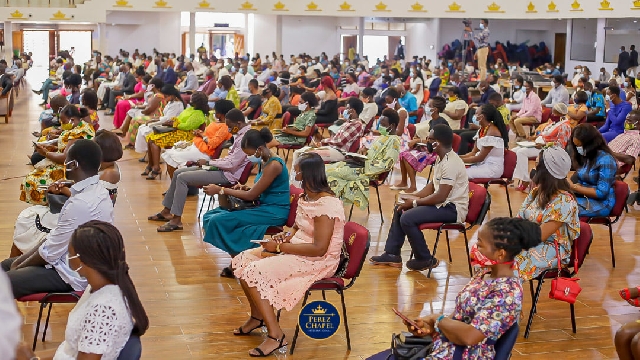 “When you put two pebbles or coins in your pocket, what do they do? They rub one another and make noise and that is conflict. It is the same with marriage. Conflicts can make or break a marriage depending on how it is handled. Conflicts can also open up areas of your spouse you did not know if you handle the situation very well”. He observed that conflicts would be different in different marriages both in terms of how often or how bad they are. “So, you must develop good conflict resolution skills so that your marriage can be strengthened”. 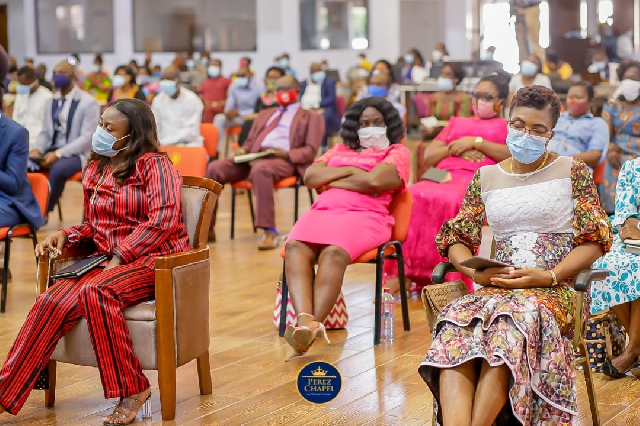 Below are the sources of conflict as taught by Bishop Agyinasare

There are 7 SOURCES OF CONFLICTS IN MARRIAGES

1.         In-laws: These set of people wield powerful influence, when it comes to marriage. The inputs and advice of these powerful few, if not handled properly, could mar your marriage. 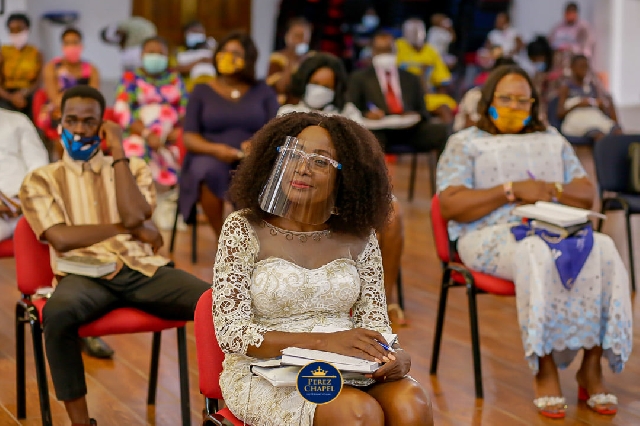 3. Habits: Spouses can be put off by irritating habits of their other partner and such habits can lead to disagreements and frequent arguments if the spouse does nothing to improve the habit. Some snore and their snoring is creating challenges. Some other people don’t bath regularly and it’s creating challenges. And they are habits that can be improved. People don’t brush their teeth before they go to bed, so, when it’s time for the ‘performance’, you’d realise the mouth odour is unbearable, so, there can’t be kissing and it’s a source of conflict. 4. Money is a source of conflict for a lot of marriages. The lack or abundance of it, immaterial. An effective money management plan should be put together. 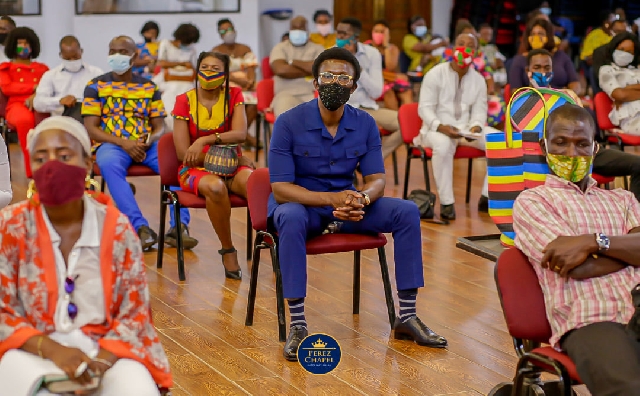 5. Friends are a source of conflict because external influence is an easy way for conflicts to arise. So, if you’re a couple, you should watch out how much room you give to third parties into your marriage. It’s not everything that happens in your marriage that you can tell your friends because there are some of your friends who will be telling you: ‘If it were me, I would have left’. They are lying. They wish they had what you have. 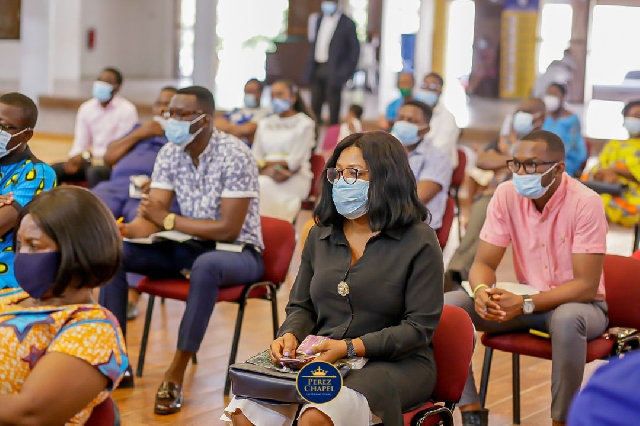 6. Sex is also a major source of conflict in marriage. And, so, couples should be able to discuss their sexual preferences with each other, without inhibition. You should be able to tell your husband: ‘This style of yours hurts me badly, it’s breaking my leg’ and my brother you should also be able to say: ‘This one [style], when you do it and you ask me for anything, I’ll give it to you’. 7. Lack of proper communication is a major source of conflict in marriages.

Dealing with the conflicts

The Pharisees and the Scribes came to ask about divorce and Jesus said: ‘In the beginning, it was not so. God made man and woman and what God has joined together let no man put asunder’. Then the Scribes quickly said: ‘But Moses gave us a bill of divorcement’. In Matt. 19:7 ¶ They said to Him, “Why then did Moses command to give a certificate of divorce, and to put her away?” Matt. 19:8 ¶ He said to them, “Moses, because of the hardness of your hearts, permitted you to divorce your wives, but from the beginning, it was not so. Matt. 19:9 And I say to you, whoever divorces his wife, except for sexual immorality, and marries another, commits adultery; and whoever marries her who is divorced commits adultery.”

We are not born with hardness of heart.

It is developed over time: -

When you start doing what is wrong, gradually your conscience is seared, and your heart becomes hard and not teachable.

Very soon what used to be wrong becomes acceptable

c)         Brushing aside your mistakes when you are made aware

Very soon you would develop a hardness of heart

When you make everything about you

When you cannot tolerate your spouse’s view except yours.

When you cannot wait for your spouse to finish their point then you interject.

When you don’t care about how your spouse is feeling and that of others.

Marriage is not about you satisfying yourself but seeking the good of the other.

When it becomes just about you, you harden your heart to the needs and opinions of others.

You are married, when it comes to sex, you are the only one enjoying; when your wife says it, you say: ‘You’re spoilt’. You are making everything about you. Your husband is saying that: ‘This thing, you, too, when you ‘hallelujah’, you really help me’, but you say: ‘I don’t like it’, then you are making everything about you. You see, marriage is not about you satisfying yourself but you seeking the good of the other.

Your wife goes to work, she comes home at 7 o’clock, you say: ‘As for me, when I was growing up, [food] was from stove to table, so, I want you to cook and immediately you finish cooking, serve it to me on the table. Your wife knows that you’ll eat and, so, Saturday, she went to the market, she shopped; on Sunday, after church, she spent time preparing different dishes and she has placed them in the fridge, so that when she comes back on Monday evening, all she needs to do is to warm the food, and, if it’s rice, quickly prepare the rice and serve you; if it’s ampesi, quickly prepare it but the stew is already done. If it’s fufu, she has the soup in the fridge and she’ll come and do the fufu for you. But you say no, from strove to table. You’re unreasonable. You’re making the marriage just about you. You’re very inconsiderate, you’re selfish; it’s just about you. You’re not thinking about how your wife is feeling, it’s just about you.

In the same way, your husband, he’s saving to buy a land for you. In the past, every month he bought you a piece of cloth but he has told you that: ‘Now the children are coming, I have to pay school fees, I’m also thinking of building a house and, so, maybe, the cloth [thing], I’ll do it every three months or every six months’ but you say: ‘No, no, no; when we started, that is not how we started. The way you started with me, now you’re changing, you have to continue how you started otherwise you’ve found another girl’. It’s just about you. It doesn’t work like that. When you were single, or when you got married and it’s you and your man, it was different; probably you were in your 20s or 30s, now you’re growing, things must be different. When it was just the two of you, he used to take you out to eat regularly, now the children have come, the cost of eating out regularly can save you and the children for one week of five days. You must understand so that you alter your style.

When marriage becomes just about you, you harden your hearts to the needs and opinions of others. It should not be just about you.

Come out of the victim mentality in your relationship. There are some who are married and they have a victim mentality: my husband is not treating me well, my wife is not treating me well. And even though they are in the marriage, they feel they are a victim. And you see, when people marry and they are going into the relationship with a lot of baggage – and there are people who have baggage: the way their father treated their mother, the way their mother treated their father, it’s baggage they are carrying. They went out with somebody and the person did something to taekwondo, the person did some moves, so, they don’t trust any man.

Or the lady did something, so, he doesn’t trust any woman, so, even though he has married, he is carrying a lot of baggage. And there are some, they were disappointed and they did not allow the disappointment to heal, so, they marry and they are coming in with a lot of baggage. If you are carrying any baggage, may God heal you today. And, so, there are many people in marriage and they are living with a victim mentality. They think as for them, their spouse doesn’t like them. And then some with this self-pity have this understanding that nobody understands them and worse of all, when they go to see a counsellor, they start thinking the counsellor has chosen sides. No good counsellor wants to marry your spouse.

Every good counsellor wants to see the good of your marriage and, so, if they rebuke you or they tell you something you must do which you refused to do, it’s not because they have chosen sides with your spouse, it is because that is your problem and you must come out of that problem otherwise the whole relationship will not work.

When you keep deceiving yourself that nobody cares, what it does is that it makes you insulated from help, you become insulated from help, you’d realise that nobody can talk to you and suddenly you become defensive when people start talking, you start defending yourself because you’re pitying yourself. May God help you. If there’s fire in your marriage, may the fire be put out by the power of the Holy Ghost and the preaching of the Word. May God use us to help you to straighten the things that must be straightened.