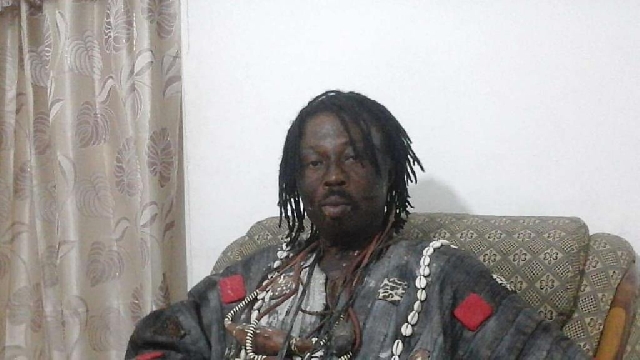 As religious bodies join the debate on LGBT+ rights in Ghana, a diviner at the Kofi oo Kofi shrine and President of Ghana Fetish Priests Association, Nana Kwaku Bonsam, has assured Ghanaians that he will continue to use his platform to work against the practice of homosexuality in the country.

Speaking to Kofi Oppong Asamoah on Class91.3FM's morning show, Nana Kwaku Bonsam said: "As the head of over 79 fetish bodies in Ghana and all over the world, I’ll call on them, through our platform, to stand against efforts to legalise homosexuality in Ghana".

He said all true spiritual diviners and fetish priests who subscribe to the ways of the ancestors and spirits oppose homosexuality.

Nana Kwaku Bonsam expressed disdain about the practice, saying "just as happened with Sodom and Gomorrah, Ghana will also go up in flames if we should accept this."

On the same show, Most Rev. Prof. Emmanuel Asante said LGBT+ is not a human rights issue and, therefore, no country can force Ghanaians to accept the act and legalise it.

It is recalled the European Union in Ghana declared its full support to the community and participated in the opening of the new space for them in Ghana.

The EU noted that equality, tolerance and respect for each other are its core values and, therefore, supports civil society organisations promoting LGBT+ rights in the country.

But Rev Prof Asante, who is the former Chairman of the National Peace Council, noted that LGBT+ has nothing to do with human rights but a confused orientation of certain individuals that can be worked on by psychologists.

He told show host Kofi Oppong Asamoah that: “LGBT is not a human rights issue, let me make it clear that it will be wrong for anybody to tell us that this is their human right because as I’m saying for us, the ontological priority of the community over the individual is very important and, therefore, we should not go by the liberal conception of human right and ignore our moderate communalism that dictates our rights here in Ghana".

“The community has spoken and I think that the authorities of our land will understand. Going abroad with a cup in hand going for aid and for them to use that as a bait to force us to accept things that are contrary to our values is unacceptable and I think it is proper for us to learn to live on our own such as cutting our coat according to our size and not allow people to use their so-called aid to force us to do things that some of their own people are fighting against.”

Rev Asante wondered why the West is attempting to force homosexualism on Africans when it is against the African culture and values.

He stated that Ghanaians will neither accept nor legalise the act.

In his words: “90 per cent of Ghanaians are religious and we can say we will not accept such practices and it doesn’t mean we are being hypocritical. As I said, homosexuality and lesbianism, from my perspective, are as sinful as any other sin but then we don’t openly begin to defend such practices in the name of human rights.

“If I get up to say that look: 'I’m a kleptomaniac, therefore, if I see you holding something because I’m a kleptomaniac, I feel like stealing it, it is my situation, so it is my right to do those kinds of things, do we simply allow that?  Yes, people may have certain orientation but we can work on people’s orientation. The psychologists have what it takes to address some of these issues and, therefore, it will be wrong and I was really offended when I read that the EU representative was talking about respecting the human rights of others. How about my rights? And I believe your freedom will end where my nose begins.

“They are the people telling us about democracy and we have the majority, 99 per cent of Ghanaians saying this is something we will not accept because it is against our cultural values, so, why do we push it?”