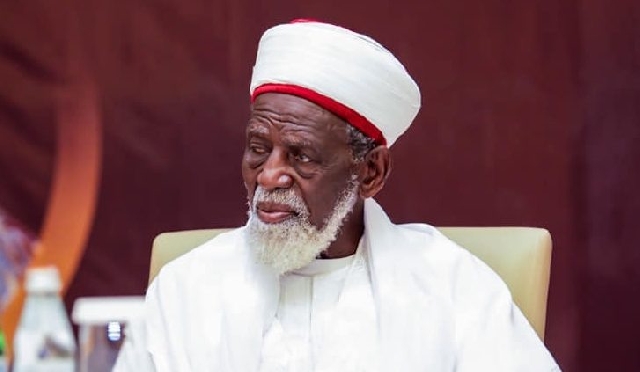 Muslims in Ghana through the national chief imam Sheikh (Dr.) Usman Nuhu Sharubutu are opposing any attempts any attempt to legalise homosexuality as a way of life.

He has also added his voice to calls for the closure of the alleged LGBT+ office recently opened in Accra.

“Islam stands vehemently opposed to homosexual inclinations because it constitutes a dangerous threat to the existence and sanctity of human family values,” the chief Imam stated in a statement signed by his spokesperson Sheikh Armiyawo Shaibu.

The chief imam noted that Ghanaians must be on the lookout because the LGBTQI community obviously does not intend to give up its ambition because “the courage to outdoor a community space in Ghana with the backup of international bodies constitute a great threat to our national fairly value system.”

He, therefore, called on all citizens to engage in serious prayers for God’s interventions to free the proponents of LGBTQI from “their sinful and deviant worldview.”

STATEMENT OF THE EMINENT NAT. CHIEF IMAM, SHEIKH (Dr.) USUMANU NUHU SHARUBUTU ON BEHALF OF MUSLIMS ON THE ISSUES CONCERNING THE ESTABLISHMENT AND OUTDOORING OF LGBTQI COMMUNITY SPACE IN ACCRA

Once again, the Ghanaian socio-cultural, religion and moral space has come under force confrontation with the proponents of the abhorrent LGBTIQ movement in Ghana. Backed by some foreign international bodies domiciled in Ghana, the movement has in a deviant posture decided to outdoor a newly acquired community space where they could meet, share and promote their deviant sexual orientation. Reports about the event in Accra have ignited heated discussions in which the opponents of the practice are vehemently calling on the government to clearly state its position.

As expected, the national chief Imam sheikh Usmanu Nuhu Sharubutu seeks to use this opportunity to state the position of the Muslims on behalf of all Muslims leaders in ghana.

First of all, we add our voice of condemnation to those earlier expressed by different religious groups and to state the Muslim as follows:

1. Going strictly by the Quranic teachings and the traditions of the holy prophet Mohammed (S.A.W) regarding the non-negotiable prohibition of same-sex, the Muslim community in remains resolutely opposed to any attempt to legalise homosexuality as a way of life.

2. The Quranic prohibitions of same-sex marriage, in all its forms (ie: LGBTQI) is succinctly expressed through the story of Sodom and Gomorrah as indicated in the following text of the Holy Quran: “And (remember) Lut when he said to his people will you commit that abhorrent indecency such that no people in the world have ever done so before you’’? what will you continue to come with lust to men in place of women. You are indeed a people committing excesses in wasteful life. Q7: 80 - 84. The negative attribution associated with homosexual act and which forms the basis for prohibitions are as follows: indecency, unprecedented abomination, unnatural lust for same-sex etc and finally a route to a wasteful and destructive life.

3. Islam stands vehemently opposed to homosexual inclinations because it constitutes a dangerous threat to the existence and sanctity of human family values. According to the Quranic guidance, the pairing of male and female is a requirement for human procreation which is integral to natural order any sexual inclinations that run counter to God’s natural order is considered an abomination, an aberration and therefore completely objectionable and reprehensive. This finds basis from the following text of the holy Quran “O mankind! Fear your Lord who has created you from a single human self and from it created its mate and from the pair of their scattered abroad a multitude of men and women Q4.” Any sexual inclination that seeks to contradict God’s natural order is considered abhorrent and therefore completely objectionable and reprehensible. According to the holy Quran, Muslims (believers) are duty-bound to enjoin righteous deeds and prevent or prohibit indecent evil deeds.

4. The mindset of LGBTQI does not uphold divine guidance as a means to happiness and a fulfilled life. It emanates from a Godless, secular humanistic worldview in which God has no place in the equation. It is therefore contradictory to our national religious worldview as a nation. Ghana’s firm belief in God is firmly captured in national symbols such as the:

It is, therefore, culturally un-Ghanaian to uphold homosexual views.

- The government to consider the immediate review of the law that criminalises homosexuality in order to make comprehensive and all encompassing.

- Finally, we call all citizens to engage in serious prayers for God’s interventions to free the proponents of LGBTQI from their sinful and deviant worldview.

The LGBTQI community obviously does not intend to give up its ambition, the courage to outdoor a community space in Ghana with the backup of international bodies constitutes a great threat to our national fairly value system. The earlier we woke up, the better.

Spokesperson for the national chief Imam