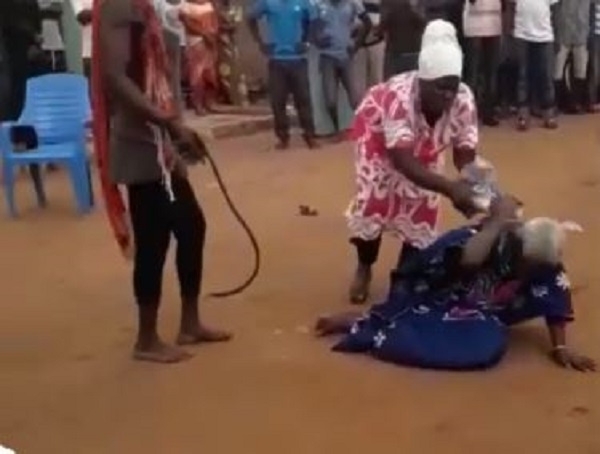 The Regional Command has launched a search for the two women

The Savannah Regional Police Command together with the District Security Council has launched a search for the two women who were captured on video lynching a 90-year-old woman for allegedly being a witch at Kafaba in the Savannah Region.

The woman was accused of witchcraft by a seer, who had been invited by the villagers to help them drive away their misfortunes.

The Minister of the Savannah Region, Mr Salifu Saeed, told Benjamin Akakpo on the Executive Breakfast Show (EBS) on Class91.3FM that the perpetrators will be dealt with.

“This is criminal, so, the law will be taking its course. Nobody will be protected,” the Regional Minister said.

Meanwhile, the women’s wing of the Peoples’ National Convention (PNC) has blamed the situation where Ghanaian women live in “constant fear of being brutalised or lynched” as witches, on religious bodies across the country.

The PNC women’s wing noted that the country’s “pastors, imams and the traditional believers” are to be blamed due to their constant sermons “that refer to women as witches in the media.”

A statement issued by the PNC women’s wing signed by its organiser, Janet Nabla, expressed disappointment with the “barbaric act".

The statement called on the women of Ghana to “wake up from their slumber and fight for their own salvation with fear and trembling," adding that: "The life of a woman in Ghana is valueless to both the politician and the religious body.”

“The Ghanaian woman lives in constant fear of being brutalised or lynched as a witch on a daily basis”, adding that “our religious [figures] such as pastors, imams and the traditional believers are mostly to be blamed” due to “their constant sermons that refer to women as witches in the media”.

“These religious bodies are not usually reprimanded by the institutions that are put in place to sanitise our airwaves and to protect women and children such as the National Media Commission, Ministry of Information and Gender Ministry,” the women bemoaned.