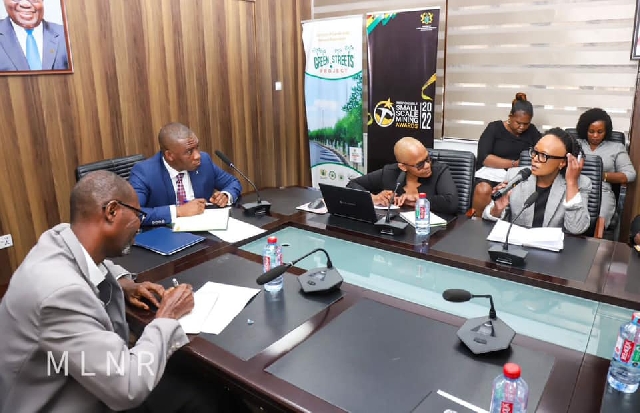 A high-level delegation from South Africa are in the country to understudy Ghana’s mining regulation regime and tap into the country’s policies and interventions geared towards reducing illegal mining activities to the barest minimum.

The eight-member delegation are on a five-day visit to Ghana to share knowledge and experience with the Ministry of Lands and Natural Resources, Minerals Commission, Precious Minerals Marketing Company (PMMC) Security agencies and all relevant stakeholders on how they can deal with issues of criminality in the mining industry.

On Monday, December 5, 2022, the Deputy Minister of Lands and Natural Resources in charge of Mines, George Mireku Duker on behalf of the Sector Minister engaged the team and gave an elaborate and comprehensive presentation on the state of Ghana’s industry and the efforts by government to develop it.

In his presentation, Mr Duker outlined the enormous benefits the country derives from the mining sector especially the small-scale mining industry.

He noted that inasmuch as the large scale mining sector makes significant contribution to the country’s economy with over 300,000 jobs created, the small-scale which currently provides direct employment to nearly one million Ghanaians has the prospect of becoming the backbone of the Ghanaian economy.

It is for this reason, the Deputy Minister said the government of President Nana Addo Dankwa Akufo-Addo has taken a special interest in the sector with an undying resolve to rid it of the challenges.

This commitment of the government to cleanse the small-scale mining sector, he explained has led to the establishment of the Operation Halt II taskforce which patrols the River bodies and crackdown on all illegal mining activities.

“Through the Ministry of Lands and Natural Resources, the government has also introduced the Community Mining Scheme (CMS) which is a more sustainable and responsible mining module”, he added.

The CMS, Mr Duker said is reserved for only Ghanaians with the objective to raising local champions in the mining industry.

He noted that among other things, government has procured speedboats, gold katchas and also recruited River wardens to provide security on water bodies 24/7.

The Deputy Minister, however, elaborated that these policies will not yield the needed result if government does not collaborate effectively with the public and communities.

In view of this, the Ministry of Lands and Natural Resources has embarked on a community sensitization program to get Ghanaians to appreciate the issues in the small-scale mining sector and support government in the fight.

She, among other things, identified security, social and economic threats posed by illegal mining.

She said the South African government, however, has a program to rehabilitate/reclaim the areas degraded by these illegal miners.