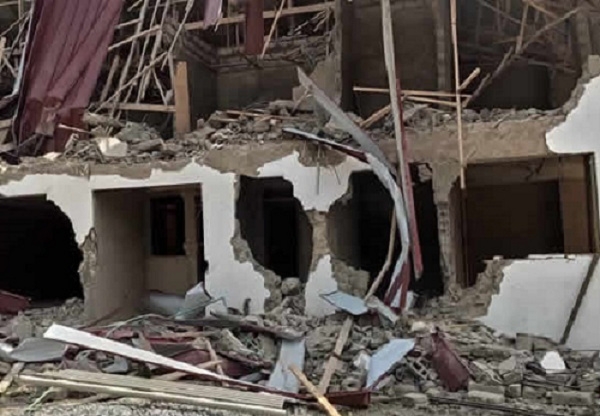 Debris of the demolished structure

The Ghana Police Service has announced that it is currently investigating the demolition of an uncompleted structure near the Nigerian High Commission in Osu in the Greater Accra Region by unknown persons.

In a statement issued by the Police Director of Public Affairs, Superintendent Sheila Kesse Abayie-Buckman on Monday, 22 June 2020, the police said it is “investigating the demolition” and, therefore, urged the “public, especially Nigerian nationals to remain calm.”

According to the police, “Preliminary investigation shows that the structure was unoccupied at the time of the incident on Friday, 19 June 2020, at about 10.30 pm. It is also within the walled premises of the quarters of some staff of the Nigerian High Commission behind the residence of the ambassador, where regular police guard is provided” and “following reports of the demolition, armed guard have been provided at the incident scene, while investigation continues.”

The police also urged the “media to be circumspect in their reportage on the incident and channel any relevant information to the police or to the Ministry of Foreign Affairs and Regional Integration.”

It also encouraged “any person with information related to the said demolition” to share with “the Police Investigative Team on mobile phone number 0244708705” or send the “information by email to the police.”

The Nigerian government said the property belongs to its Mission in Ghana.

This has led the Minority in Parliament to call for an independent probe into the demolition exercise, since, according to them, it can hurt Ghana’s long-standing diplomatic relations with Nigeria.

Meanwhile, the Osu stool said in a statement that it has title to the parcel of land in question, which, it noted, is separate from that which is currently being occupied by the Nigerian High Commission.

It said the stool has a high level of respect for foreign missions and has, therefore, on several occasions, verbally informed the unidentified trespasser about the ownership status of the land through the security personnel resident on the parcel of land but he/she still went ahead to put up a structure.