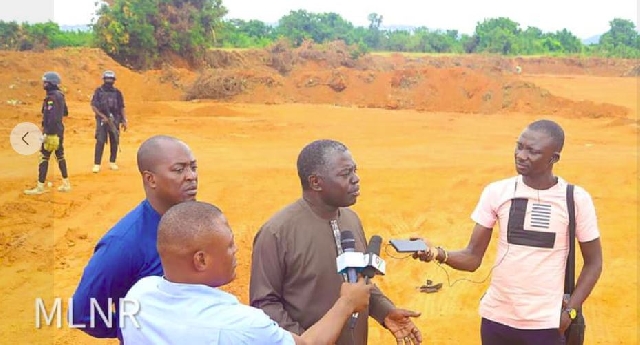 The Deputy Minister for Lands and Natural Resources, responsible for Lands and Forestry, Benito Owusu-Bio has warned individuals and groups winning sand on portions of the Amarhia Diary Farm Lands in the Adentan Municipality of the Greater Accra Region to as a matter of urgency halt such illegalities.

He warned that anyone found in the act will be arrested and prosecuted.

The Deputy Minister gave the warning when he led a team from the Ministry, the Lands Commission and a task force from the Ghana Police Service to inspect the Lands on Thursday, 11th August 2022.

He announced that Government through the Ministry of Lands and Natural Resources will by end of October this year go ahead with its intended plan to allocate 40 percent out of One thousand acres of the Amarhia Diary Farm Lands to five families identified as Pre- acquisition owners of the Land, whiles Government retain 60 percent.

The visit also afforded the Deputy Minister the opportunity to see at first hand the final work done by the surveyors ahead of the allocations to the five families.

"The Amarhia Diary Farms Lands has not been ceded to anyone and we don't want any encroachers on it", he maintained.

The Deputy Minister used the opportunity to visit some portions of the Land being used for the construction of 32 residential bungalows for Staff of the Ministry of Agriculture, following their relocation from the Borteyman.

The Executive Secretary of the Lands Commission, Mr. James Dadson stated that as part of efforts to allocate the portions of Lands to the families, his outfit, the Ministry and the Local Assembly will further engage to fashion out a scheme to among others aid development in the area.