Thank you for protecting environment, having mercy on Bantamahene – Rawlings to Otumfuo 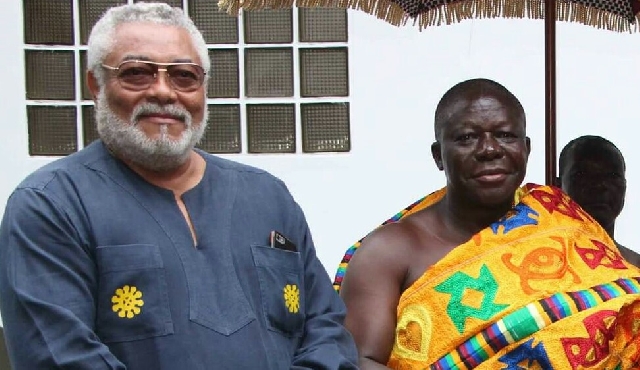 A video which went viral on social media captured Nana Banatamahene prostrating before Otumfuo and pleading for forgiveness for putting up a structure at the Race Course after diverting the sacred Subin river.

In a statement, Mr Rawlings said: “We each have to learn to take a cue from the Asantehene and be bold and audacious in our defence of the environment, especially from thieves and crooks, who, with impunity can, collect parcels of land anywhere, anyhow and do as they wish against the public good and the sanctity of nature.”

Former President Rawlings also expressed “gratitude to Togbe Afede XIV, President of the National House of Chiefs, for taking the initiative to lead a delegation of the Volta Region House of Chiefs to the border areas in the region to ascertain things for themselves.”

According to Mr Rawlings, “Some of the unsightly things we see on the internet do not speak well of us locally and internationally.”

The former President further stated: “[Inasmuch] as I find it tiring and tedious to be engaging in self-defence when I have given my all, all these years, I will soon deal with the callous agenda of bile by the likes of Kwamena Ahwoi, who are desperately seeking control of the NDC party.

He added: “The NDC could, should and has survived on the authority of the word but if care is not taken, it will collapse and drown as has been happening, on the word of those in authority.”