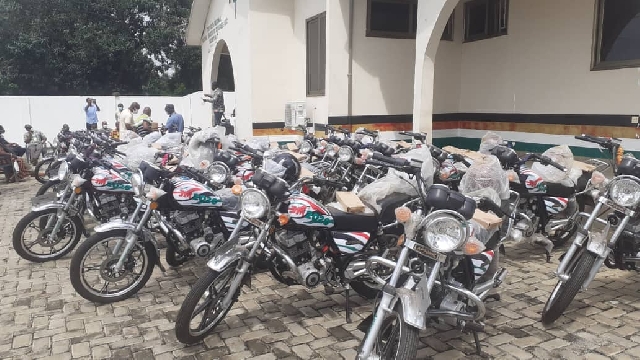 V/R: Mahama donated 36 motorbikes and 18 laptops to NDC offices in the Volta Region

The opposition National Democratic Congress (NDC) in the Volta Region has received campaign support from the flag bearer of the party, former President John Dramani Mahama, as part of measures to canvass support at its grassroots, ahead of the December polls.

The regional office received some 36 new Driver and Vehicle Licensing Authority-registered motorcycles and 18 Lenovo laptops on Friday, 24 July 2020 at the party's regional office in Ho.

The Volta Regional Chairman of the NDC, Henry Ametefe, disbursed the donated items on the behalf of the former President to the leadership of the 18 constituencies.

Each constituency received two motorcycles and a laptop.

Mr Henry Ametefe asked the people to use the motorbikes to embark on a door-to-door campaign in their various areas, admonishing them to exercise caution so as to prevent accidents.

The party's regional secretary, James Gunu told the media that the former President made the gesture to facilitate community campaign across the various constituencies since the COVID-19 pandemic had prevented political rallies from occurring.

"The motorbikes are supposed to facilitate the party work on the ground. That means that our people (campaigners) have to get closer to the doorsteps of the people. Because of the COVID-19, we are not going to have big rallies in the constituencies, definitely, we need to get our messages closer to the people at the grassroots," he said.

He added that the laptops will also facilitate their campaign and election activities since information and technology are crucial in collating election results.

Mr James Gunu said, winning the December polls is a must for the NDC hence the party will leave no stone unturned as far as measures to win are concerned.

"This is an election that we need to win. It is a must-win election, so everything that we need as party people to make sure that we win this election must be done," he noted.

The party has also formed an information technology (IT) directorate in the region to work with the election committee and also to be in charge of the use of laptops.

Leadership of the Volta Region NDC thanked John Mahama and promised to ensure that the items are put to good use and geared towards achieving victory in the December polls.