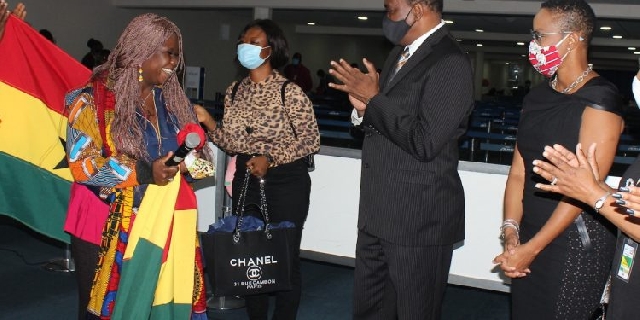 The arrival of the Ghanaian nurses in Barbados

Twelve people, including nine of the nurses who recently arrived from Ghana, returned positive results from COVID-19 tests conducted on Friday by the Best Dos-Santos Public health Laboratory.

George said the laboratory conducted 248 tests on Friday and the remainder were negative.

In addition to the nine nurses – 95 arrived in Barbados on Thursday – there is one Barbadian woman who returned on July 29 and not June 29 as announced by George, a male visitor who arrived on July 30 and a Barbadian man who arrived from the United Kingdom with a negative test, but was positive when he was tested again to travel.

“We are still investigating the circumstances of the last case. This will require extensive contact tracing, which the population is so aware that the public health teams do on a daily basis.”

He said monitoring and surveillance would be increased at designated facilities.

George said all of them were showing no symptoms and “are likely to be in the recovery phase”, with only one person’s indicators pointing to being in the acute phase.

He said everyone who tested positive was immediately placed in isolation at Harrison’s Point.

George said all of the nurses went into 14-day quarantine, as was reported in the Weekend Nation.

He also advised all of those who would attended the ceremony at the Grantley Adams International Airport – including Minister of Health Jeffrey Bostic, Minister of Tourism Lisa Cummins, executive chairman of the Queen Elizabeth Hospital, Juliette Bynoe-Sutherland and permanent secretary in the Ministry of Health, Janet Phillips – to “separate themselves from their workplaces” “out of an abundance of caution”, and the Ministry would arrange for them to be tested.

“Let me reiterate this has proved that our public health protocols are working, allowing us to detect positive cases at our ports of entry and before arriving passengers are allowed to mix with the general population,” George said.

“From the beginning, the Ministry of Health and Wellness has made it clear that testing of all arriving passengers for COVID-19 was a necessary pre-condition for reopening our borders to international travel and resuming regular air services.”

The Chief Medical Officer said he was confident these protocols were effective, but the requirement of a second test on the seventh day for passengers arriving from high-risk areas, was an acknowledgement of the possibility of exposure during the 72-hour window for the PCR test.