$170m JD: It's 'stupidity' to blame me – Agyarko fumes; says Ghana better off than paying $7.2bn in excess charges 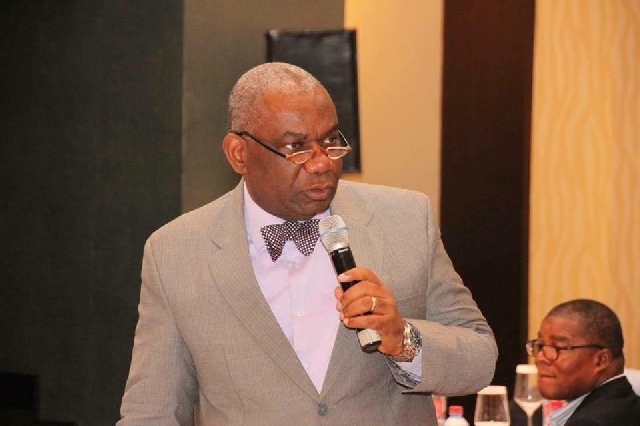 Former Energy Minister Boakye Agyarko has said “it is an act of ignorance and stupidity” for anyone to hold him responsible for the $170 million judgment debt slapped on the government of Ghana by a Commercial Court in London for unlawful termination of a power purchase agreement with independent power producer Ghana Power Generation Company (GCGP).

“When a cabinet decides on a matter, how does it become the personal decision of the individual who has to do the representation of cabinet?” Mr Ayarko asked.

“To think like that means you are not even fit to participate in governance”, Mr Agyarko said on Accra-based Citi FM.

The former minister noted: “when I was in office, some people tried to get me to vary the report as approved by cabinet and my position was clear that if you are a sector minister and cabinet approves, it does not lie within your remit to alter the decision by cabinet”.

“So, it amazes me that some people can stick their mouth and say that because I was minister, I should be personally charged with the responsibility of that liability. It is ludic”, he said.

Mr Agyarko, however, believes Ghana is better off with the $170 million judgment debt.

“We have paid almost over $1 billion for excess capacity. The review committee estimated that the contract, as they were, if they were allowed to stand, the country will be paying at the end of the 13th year, $7.2 billion in excess capacity charges”.

“Now, if the country is going to be saddled with $7.2 billion for excess capacity, we needed to rethink. In the PPA review, what it said was that if we could get the termination and the management of all the excess capacity, the liability that we will be faced with is about $600 million out of pocket.”

“Now, $600 million in year one compared to $7.2 billion, now even if you do the next present value calculation and bring the $7.2 billion into a one-year payment, we are still better off”.

“I don’t understand why the people whose time these excess capacity contracts were signed now have the guts and the audacity to accuse people who are trying to manage the mess they created”.

Meanwhile, Pru East MP Kwabena Donkor, who was the Minister of Power in the erstwhile Mahama administration and signed the power purchase agreement with GPGC, which was later cancelled by the Akufo-Addo administration leading to a $170-million judgment debt, has said he is ready to face a probe by the Criminal Investigations Department of the Ghana Police Service as hinted at by Attorney General Godfred Yeboah Dame.

Mr Dame had said the previous administration is to blame for the $170-million judgment debt slapped on the country by a London commercial court regarding the 2018 unlawful termination of the PPA.

He, thus, intends lodging a formal complaint with the CID to probe the deal, which was signed between the two parties in the Mahama administration, since, according to him, a report by a committee constituted in September 2016 revealed that the agreement had issues and consequently resulted in excessive power supply.

“The fact, as borne out by the PPA committee’s report, was that the agreement, together with other agreements, had resulted in such excessive power supply to the state”, he told Accra-based Joy FM, adding: “The state was going to lose $586m per annum and a cumulative cost of about $7.6billion dollars between 2013 and 2018.”

“So, I think that when it comes to financial loss, it is so clear in my mind that the responsibility lies clearly with those who entered into the agreement”, he noted.

The basic point, he said, “is that the entry into this transaction was unnecessary”.

“The entry into this transaction was what resulted in financial loss to the state.”

He revealed: “I, on account of all of this, am going to write a formal complaint requesting an enquiry by the CID into the conduct of the public officers who acted in the manner which resulted in the signing of an agreement which resulted in financial loss to the state.”

“I think that first and foremost, the entry into the agreement itself was wrong”, he asserted.

“There was no justification because their own committee determined that the agreement was going to result in excessive power.”

“The committee set up by the NDC in 2016 – against the background of a recognition that there were so many PPAs entered into by the NDC administration, and, therefore, those agreements were going to result in excessive capacity development, as it was termed – came to a conclusion that this agreement had to be terminated. The committee singled out this particular agreement for termination”, he stressed.

Responding to the AG’s comments, Dr Donkor, who superintended the contract in 2015, said government’s work is a continuum and, so, “if today, another attorney general, who the London court said had slept on the job, suddenly thinks he can divert attention by recommending investigations by the CID, it is his right”.

“They can always conduct investigations but the truth always stands out”, he told Valentina Ofori-Afriyie on Class91.3FM’s mid-day news 12Live on Wednesday, 23 June 2021.

“This particular agreement”, he noted, “had the shortest duration of four years and it was the only one that did not require any financial security from the Ghanaian state”.

“It was signed in July 2015. I exited public office in December 2016. I signed it going through the appropriate processes. It went to cabinet, it came to parliament; you can refer from the Hansard and find out whether there was any argument from their side on the floor of parliament”, he argued.

Concerning the AG’s claim that a committee recommended the termination of the deal during the Mahama administration, Dr Donkor said: “It is not factual”, stressing: “No committee was set up to review this contract”.

According to him, “a committee was set up, having come out of dumsor, to review the whole power sector and that committee made some recommendations, which did not include, as far as we know, the termination of any contract”.

He noted that “assuming they were even to terminate, the termination should have come out of a negotiation, not a unilateral decision”.

Addressing the AG’s assertion that the agreement, together with other PPAs, was costing the state $586 million per annum for needless excess capacity charges, Dr Donkor said: “It is just political noise-making”.

“As for the figures they are bandying around, no energy professional takes those figures seriously. They need to be interrogated”, he claimed.

Asked if he did nothing wrong and ready to face the CID, Dr Donkor said: “Absolutely”, adding: “As one of our colleague MPs says, ‘you don’t frighten a chief warrior with a musket. You don’t frighten me with a police CID. I’ve been there several times. My integrity will always defend me. I do things in the national interest”.

What Happened In London Court

Feednews.com reported recently that the Commercial Court in London refused to allow Ghana to bring a belated challenge to an UNCITRAL award worth over US$134 million in favour of a power contractor, ruling that national elections and COVID-19 pandemic did not make the state’s delay reasonable.

The case started under Gloria Afua Akuffo, when she was the Minister of Justice with Godfred Yeboah Dame as her deputy.

State attorneys, including Helen Akpene Awo Ziwu, Anna Pearl Akiwumi Siriboe and Grace Oppong Dolphy in Accra, were also mentioned in the case as having failed to beat a 28-day deadline.

However, the state attorneys, together with Mr Dame, who took over from Gloria Afua Akuffo, went sleeping on the job, leading to a delay in contesting the judgment debt.

The result of that deep sleep is that poverty-stricken Ghana will be paying a whopping US$170 million in damages to the claimants; Ghana Power Generation Company (GPGC) located at 1 Airport Square Building, 7th floor, Accra.

Mr Dame and his subordinates’ attempts to hide behind the 2020 general election and the COVID-19 pandemic as excuses for the delay was rebuffed by the London court.

In a ruling on Wednesday, 8 June 2021, Mr Justice Butcher refused to grant the government a time extension to apply to set aside the award – adding that the state’s grounds for challenging it were “intrinsically weak”.

Global Arbitration Review previously reported on the award in favour of GPGC against Ghana.

GPGC was represented before the court by Charles Kimmins QC and Mark Tushingham, where Ghana was said to have been too late to challenge the decision against it.

In the arbitration, GPGC, used Three Crowns and Ghanaian firm, Kimathi & Partners, along with damages experts from FTI Consulting.

Ghana also had representation from the attorney general’s office and Amofa & Partners in Accra.

The underlying dispute concerned the government’s alleged wrongful repudiation in 2018 of a contract for a “fast-track power generation solution” – involving the relocation of two aero-derivative gas turbine power plants to the government’s territory.

It also dismissed the government’s counterclaim.

The award is said to be worth around US$170 million. Under English law, the government had 28 days to bring a challenge to the award.

Three days before the expiry of that deadline, the government’s then solicitors, Omnia Strategy applied to the court for a 56-day extension.

Omnia said it had only just been instructed and that bureaucratic processes had been delayed because of national elections in the country and because key members of the attorney general’s office had contracted covid-19.

The court agreed to extend the deadline for any challenge to March 8, but the government only brought its set-aside application on April 1, now represented by Volterra Fietta.

The law firm explained that, the new attorney general, had only been sworn in on March 5, and the firm had been instructed 10 days later.

In the latest ruling, Butcher J, said the government’s delay was “significant and substantial”, as its request for a second extension had come 38 days after the statutory deadline and 27 days after the first extension expired.

The fact that a large sum was at stake in the arbitration was not a reason for the challenge taking longer to make. The fact that the attorney general had not been sworn in until March 5, did not mean the government was unable to act in the meantime, the judge said.

The government had still managed to instruct Omnia during this June 12, 2021, 10:37 Pagina 2 di 5period and the new AG, who was previously deputy attorney general, had been among the counsel in the arbitration.

Echoing a ruling in the P&ID v Nigeria case, the judge said the fact that a party is a foreign state is a matter of “little significance” when it comes to compliance with court directions.

That an entity may have “bureaucratic decision-making processes” does not justify the delay.

As for arguments about covid-19, the judge said the evidence as to the way in which the pandemic had affected the government was “wholly inadequate”.

There needed to be a detailed explanation of how it had affected “particular people or particular processes”. The judge also said that the grounds of the government’s proposed challenge to the award were “intrinsically weak”.

One argument that the tribunal failed to be “guided by the terms and conditions” of the contract was a “clear case of an attempt to present alleged errors of law as errors of procedure”.