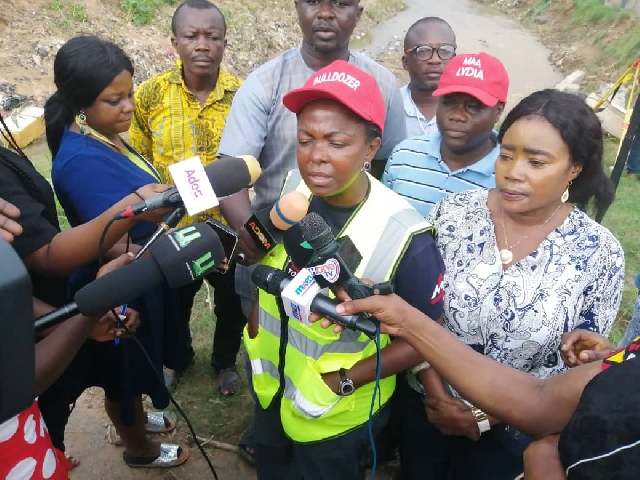 The Member of Parliament (MP) for Ayawaso West Wuogon, Ms Lydia Seyeram Alhassan, has begun processes to curb the perennial flooding which affects residents of the Westlands and its environs.

The MP, whose desire is to end perpetual flooding in parts of Ghana’s most affluent constituency, deployed personnel from the Hydrological Services Department to visit the areas mostly affected by the recent heavy downpours.

The Head of Drainage Engineering, Seth Kudzordzi, who led a team of about 10 men to assess the situation, observed that measures have been taken, previously, to “desilt or dredge the drains but their efforts have not been successful”.

After a detailed assessment of the situation, he concluded that “the culvert is too small to carry the flood discharges, which overtops the roads and causes floods”

Mr Kudzordzi explained that the detailed surveying exercise is aimed at redesigning a new culvert to bring an end to the flood, adding that “once it’s replaced with a culvert of adequate size, there won’t be any flooding again”.

The drainage construction, according to Mr Kudzordzi, is expected to be completed within two months after the contract is awarded.

Madam Lydia Seyeram Alhassan charged the personnel of the Hydrological Services Department, to treat the project as an emergency to help relieve residents of their plight.

Speaking to the media, she refuted claims that the timing of the construction of the drain was for electoral benefit.

“I have been MP for just two years; this is not the first project I am undertaking. I have constructed roads and other bridges, so, nobody can say I’m doing this for votes.

She further pointed out that “it’s a natural disaster and we have to find a solution to it.

“It’s a must-do project and that’s why I am doing it and not for electoral benefits”.