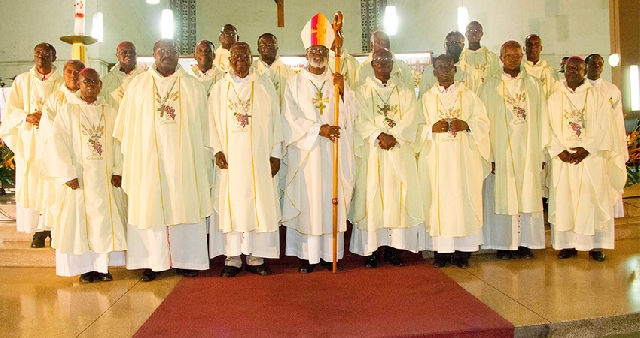 The Secretary-General of the Catholic Bishops’ Conference, Very Rev. Fr. Lazarus Anondee, has said the Conference will use its platforms to campaign against any political party that does not commit to ending vigilantism.

Rev. Fr. Anondee said this at an event organised by the National Peace Council for the two major political parties – the New Patriotic Party (NPP) and National Democratic Congress (NDC) – to append their signatures to the final roadmap and code of conduct for the eradication of political vigilantism in Accra on Tuesday, 4 February 2020.

While the NPP agreed to the terms of the code of conduct and signed the document, the NDC refused to sign the document, describing it as pre-mature.

A member of the NDC delegation at the meeting, Mr Alex Segbefia said going ahead to sign without the input of the other recommended stakeholders will cripple the effectiveness of the roadmap which will then yield no results in the fight against political party vigilantism.

But speaking at the event, Rev. Fr. Anondee said the Bishops take the issue of vigilantism seriously and want to see more commitment on the part of politicians to end that “monster”.

He said: “We’ve been part of this process with the National Peace Council and I want to say that I’ve always carried reports back to the Bishops telling them about the progress that has been made. [At] the last general assembly in Cape Coast, they interacted with the Peace Council and even inquired about how the issue of vigilantism is being dealt with. It shows the importance that they attach to this issue.

“The Bishops think that it’s a monster that is just lurking around to devour us if we don’t do anything about it. I believe that where we are now, it is not to say that we have scored success and it is also not to suggest that we’ve failed. I think that there should be more commitment to see to it that this issue is dealt with once and for all. Let us not allow this issue of vigilantism to embarrass us as one diplomat said some time ago because it can easily embarrass us.

“It is a reality that we face and I don’t think that we should pretend that it is not an issue that we should toil with and, so, I believe that the support that the Bishops have for this course facilitated by the peace council, the support is very strong.

‘We’ll continue to put our weight behind the National Peace Council and all the stakeholders that are carrying out this dialogue and we want to appeal to the political parties to see it as something very important and don’t be surprised that if any party does not show commitment to ending this, we may have no choice than to use our pulpits to campaign against such parties because if we encourage this, then we are not encouraging democracy, then we are not trying to help build our country and, so, please, we appeal to yoU: let us ensure that the commitment that we’ve shown so far is carried out.”

The roadmap is the culmination of months of dialoguing involving stakeholders on ending political violence and vigilantism, especially in the wake of the Ayawaso West Wuogon by-election violence.