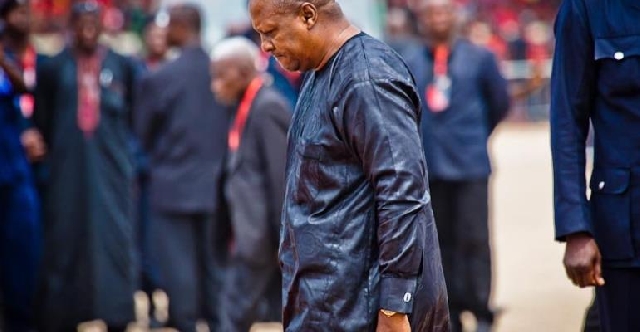 Former President John Mahama has sent his condolences to the family of the late Kwadwo Owusu Afriyie and the governing New Patriotic Party.

“My condolences to the family of our dear brother, and my good friend, Sir John, Kwadwo Owusu Afriyie”, Mr Mahama said on Thursday, 2 July 2020.

The flag bearer of the National Democratic Congress (NDC), described the late General Secretary of the NPP as a “feisty and intriguing politician who brought lots of interesting moments to our political discourse”.

“I also extend my condolences to the entire New Patriotic Party (NPP) family for this painful loss”.

Sir John, who was the head of the Forestry Commission, passed away on Wednesday night at the Korle Bu Teaching Hospital while battling COVID-19 in intensive care.

My condolences to the family of our dear brother, and my good friend, Sir John, Kwadwo Owusu Afriyie. He was a feisty...

Earlier, President Nana Akufo-Addo also said: “I received the news of the death of Kwadwo Owusu Afriyie, aka Sir John, with great shock and deep sadness”.

Indeed, he said, “the disbelief and grief expressed by many at the news of his death are testimony to how people, in and out of the New Patriotic Party (NPP), felt about him”.

Paying tribute to Mr Owusu Afriyie, President Akufo-Addo described him as a “passionate devotee of the Danquah-Dombo-Busia political tradition, outstanding stalwart of the NPP, strong defender of human rights as a lawyer, proud, faithful adherent of the Christian Adventist faith”, noting: “These were the multi-faceted aspects of the career and character of ‘Sir John’, which earned him considerable renown both as erstwhile General Secretary of the NPP and CEO of the Forestry Commission”.

“Energetic, ebullient, jovial, with an exceptional sense of humour, and possessing a limitless store of folktales and proverbs, he affected positively every person with whom he came into contact”, the President said.

Mr Akufo-Addo said Sir John “was truly unforgettable, and our party and government owe him an immense debt for his work and commitment”.

“My wife Rebecca and I extend our deepest condolences to his entire family. Sakora Wonoo has lost a valiant son. He will be widely missed”, adding: “May the Good Lord bless him, and give him a peaceful place of abode in His Bosom until the Last Day of the Resurrection when we shall all meet again”.

“Sir John, we will never forget you!!”

Apart from Sir John, the 2020 Campaign Manager of the governing party, Mr Peter Mac Manu; and Deputy Minister of Trade and Industries Carlos Ahenkorah, have been admitted to the Intensive Care Unit of the Korle Bu Teaching Hospital after testing positive for COVID-19.

They are among some government officials and prominent names that are receiving treatment at the facility for COVID-19.

The number figures were announced by the Director-General of the Ghana Health Service, Dr Patrick Kuma-Aboagye at a press briefing organised by the Ministry of Information.

So far, the number of patients who have recovered and been discharged stands at 14,046.

Out of the current case count of 4,467, Dr Kuma-Aboagye said 22 are in severe condition with eight in critical condition.

Six others are on ventilators.

The Greater Accra Region is still leading with 10,296 cases, followed by the Ashanti Region – 3,834 cases