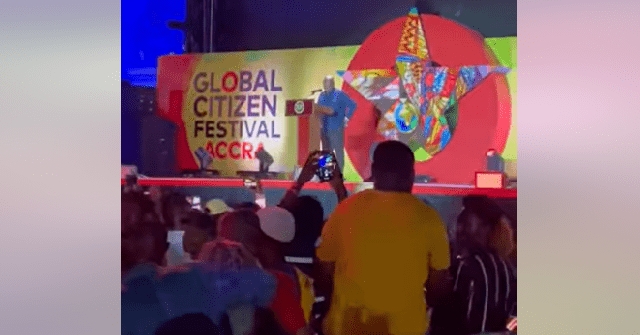 President Akufo-Addo at Global Citizen Festival over the weekend

A political science lecturer is calling for a rebranding of the political image of the sitting president, Nana Addo Dankwa Akufo-Addo.

According to the lecturer, what transpired at the Global Citizens Festival (GCF) has dimmed the political lights of the president who has done only two years in his second term.

Mr Jonathan Asante Okyere made this call IN reaction to the boos the president suffered while delivering a speech at the 2022 Global Citizens Festival held at the Independence Square in Accra, Ghana.

He argued that the boos the president suffered from the young people who had gathered for the concert over the weekend were the lowest in his political career as a president.

Mr Asante Okyere who lecturers at the University of Cape Coast (UCC) in the Central Region spoke on the mid-day news on Accra 100.5 FM on Monday, September 26, 2022.

In his view, this seldom happens in Africa but is rampant in Europe, America and Australia among others.

He called on African leaders to be wary of their quest to win elections at all costs when there are no improvements in the lives of the ordinary voter.

"This government won a four-year mandate and in the middle of the term coined another election-winning slogan 'Break the Eight-Year'", he noted, and in view of the boos, added “this is a wake call for the president and his handlers.”

"People are singing praises into the ears of the president," he stated and noted that the president is being fed with sweet talk when things are not all that rosy under his administration.

"These are young people from all walks of lives who engaged in that spontaneous act," Mr Okyere declared.