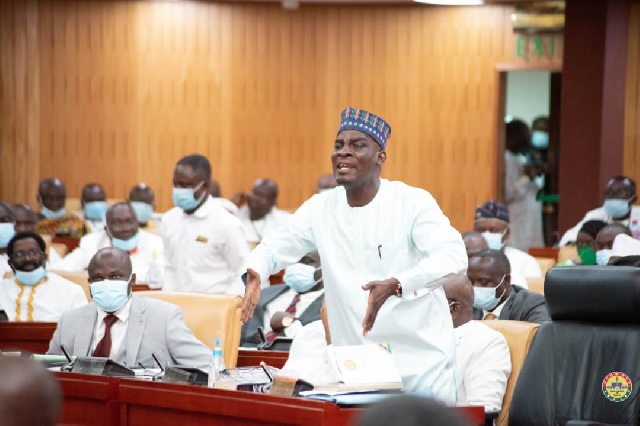 The Minority caucus of parliament has described the Majority side as an “irresponsible” bunch who are “running away” from their own budget and blaming Speaker Alban Bagbin for its rejection.

The house rejected the 2022 budget on Friday after the Majority side walked out in protest to the presence of the opposition National Democratic Congress’ General Secretary Johnson Asiedu Nketia in the public gallery of the chamber.

Subsequently, the Majority has described the events of Friday as “unconstitutional” and accused the Speaker of “mischievously” presiding over an illegality, saying he must “bow his head in shame”.

In a counter-statement, however, the Minority said the Majority must take responsibility for the rejection of the budget instead of raining insults on the Speaker.

“The press statement of the NPP members of parliament claiming unconstitutional conduct by the very experienced Rt. Hon Alban Sumana Bagbin should be disregarded with all the contempt it deserves”, the statement signed by Minority Leader Haruna Iddrisu on Sunday, 28 November 2021 said.

“Parliament has duly rejected the 2022 Budget. Until and unless the Government removes the draconian taxes and revises contained in the rejected budget, the NDC Members of Parliament remain unable to support such policies”, it added.

It noted: “The solution to Ghana’s current crisis lies in cutting down on unprecedented levels of looting of public funds by NPP officials reflected in lavish lifestyles of NPP Government and party functionaries and reduction of unnecessary Government expenditure. Until there is value for money no additional taxes should be imposed on the already suffering masses of Ghanaians”.

Read the full statement below:

The Minority is shocked and disappointed at the recent attack of the Rt. Hon Speaker by the Majority Leader in his attempt to explain away their inability to show leadership in the House during the consideration of the 2022 Budget Statement and Economic Policy.  The Minority wishes to strongly advise the Majority Leader and Government to accept defeat, acknowledge the rejection of the 2022 Budget Statement and Economic Policy by Parliament and focus on discussions on how to save the country from an imminent economic crisis.

Parliament is governed by the 1992 Constitution and the Standing Orders of Parliament and not the imagination and thinking of any Member. The Minority Caucus wishes to state that the Speaker applied strictly the rules, procedures and practices of the House and urged the public to ignore the allegations peddled by the Majority Caucus that sought to bring the image and reputation of the Speaker into disrepute. The Minority dismisses, with contempt, the comments of the Majority Leader.

It is the height of irresponsibility that the Nana Addo/Bawumia Government could not marshal the full strength of their Members of Parliament (MPs) to defend their 2022 budget before Parliament. It is a known fact that the 137 New Patriotic Party (NPP) and the one independent Members of Parliament constitute a majority group of 138 MPs of the Parliament of Ghana and thus outnumber the National Democratic Congress (NDC) which has 137 MPs. With this number which could secure their victory in any vote, why did they run away from their own budget? There is no way the Standing Orders of Parliament or 1992 Constitution or supports the Majority Leader’s position that the Budget has not been rejected. It is trite law that you cannot sleep on a right and wake up to claim it. How could Members of a Governing party walk out on their own budget? They walked out only to save their face and a damning humiliation. They simply did not have the numbers to win any vote much more approve a Budget.

Sadly, why did the NPP Members do the unthinkable and for the first time in our recent political history a so-called Majority side walked out on its own budget? Which serious governing party a critical matter such as the approval of an economic policy and budget brought by a government formed by their party. It is Ghana’s day of shame that the majority failed to stand their ground and be counted as those who seek to impose killer taxes on our already suffering citizens.

We wish to reiterate that what happened after the majority group walked out of Parliament is perfectly legal and meets all constitutional standards and conventions of Parliament and any court will have a Herculean task to attempt to set it aside. The press statement of the NPP members of parliament claiming unconstitutional conduct by the very experienced Rt. Hon Alban Sumana Bagbin should be disregarded with all the contempt it deserves.

Parliament has duly rejected the 2022 Budget. Until and unless the Government removes the draconian taxes and revises contained in the rejected budget, the NDC Members of Parliament remain unable to support such policies.

The solution to Ghana’s current crisis lies in cutting down on unprecedented levels of looting of public funds by NPP officials reflected in the lavish lifestyles of the NPP government and party functionaries and reduction of unnecessary Government expenditure. Until there is value for money no additional taxes should be imposed on the already suffering masses of Ghanaians.

The NDC caucus in Parliament calls on the public to remain steadfast in their expectations and conviction that the NDC caucus will remain committed to the cause of ordinary suffering Ghanaians.

The NPP Majority Leadership should appreciate that this is a new Parliament; a hung Parliament. Those days of the NPP Majority bullying and disrespecting an “insignificant” Minority because of their overwhelming majority numbers are over.

The NPP Government should rather concentrate on bringing a revised Budget that will, among others, address the following:

1. Suspend the Electronic Transaction Levy (E-Levy); The Government should suspend the E-Levy and properly engage stakeholders to agree on a reasonable policy. How can mobile money payments, bank transfers, merchant payments, and inward remittances be charged 1.75 per cent? The policy is not retrogressive, not pro-poor and does not support the much-touted digitalisation agenda and cash-lite economy that we all yearn for.

2. Withdrawal of Agyapa; The NDC Minority will not support any collateralisation of our revenues particularly mineral resources. The future of our country will be bleak if we continue in that regard. We cannot jeopardise the future generations of our country just for our present desires.

3. Provide for Tidal Waves Disaster; The Government should incorporate in its revised Budget adequate measures to address the issue relating to the Tidal Waves Disaster in Keta and other communities. The victims should be supported. And the Phase II of the Blekusu Coastal Protection Project must find space in the Budget.

4. Properly re-construct the wording relating to the Aker Energy relating to GNPC's acquisition of stakes from Aker Energy and AGM Petroleum, the revised Budget should reconstruct paragraph 829 of the rejected Budget to reflect the decision of the House as captured on 6th August 2021 Votes and Proceedings of Parliament.

The NPP Majority Leadership should appreciate that this is a new Parliament; a hung Parliament. Those days of the NPP Majority bullying the Minority because of their “excess” numbers are over. But with the nature and character of this new Parliament with its near equal numbers (137+137) calls for a broader and thorough consultation to secure the best national interest for the good of the Ghanaian people.

We hope the NPP government will do what is right and proper when considering a revised budget. The NPP Government should critically take on board the view of the Minority and the sentiments of the Ghanaian populace and bring a Budget that is acceptable and address the issues of the general public. The NDC Members of Parliament has no approving a Budget that addresses the generality of the concerns of the Ghanaian people.