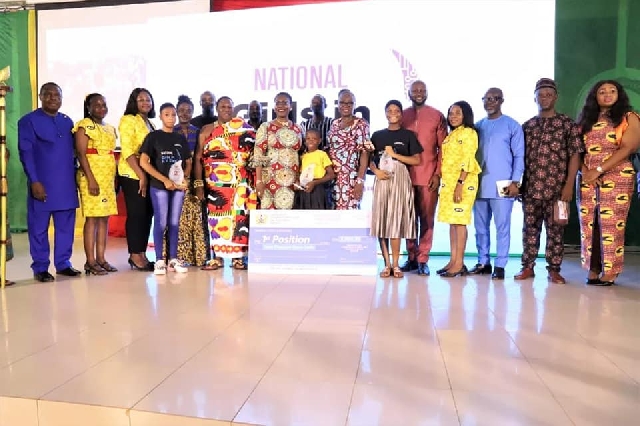 An eleven-year-old pupil of the Prang R/C Primary School in the Pru West District, Princess Kumi, has been adjudged the winner of the 2021 Bono East Girls in ICT programme.

The 11-year-old pupil was initially not selected among 1,000 girls to be trained in the region but joined the programme as a substitute for another girl, who could not make it due to ill health.

“With my dream to become a programmer, there was no way I would miss this opportunity. When I learned my elder sister, Tabitha Kumi, had been selected to take part in the Girls in ICT programme, I quickly went to my teacher and told her to allow me to join”, she said.

“I was so happy when I was called to replace a girl who could not make it. I knew it was my time and here I am, the winner of the 2022 Bono East Girls in ICT programme. I think I deserve a standing ovation,” the 2022 winner stated during the climax of the girls in ICT programme held in Techiman in the Bono East Region on Wednesday, 20 April 2022.

She also noted that her Ministry, through the Ghana Investment Fund for Electronic Communications (GIFEC) is implementing the Rural Telephony and Digitalisation Inclusion Project which will construct 2,016 rural sites for voice and data nationwide to aid in accessing ICT.

"In bridging the ICT gap, it is absolutely crucial that we learn how to utilise digital infrastructure, applications and systems in a secure manner, and protect our cyberspace and citizens as a nation.”

A hundred students who excelled in the programme, received laptops while the best 3 received a cash award and other incentives.

Also, the top 20 girls will have Cyber labs built and equipped in the schools where there are no labs, while those with existing labs will be refurbished.

The teachers of the top 10 girls were given laptops.