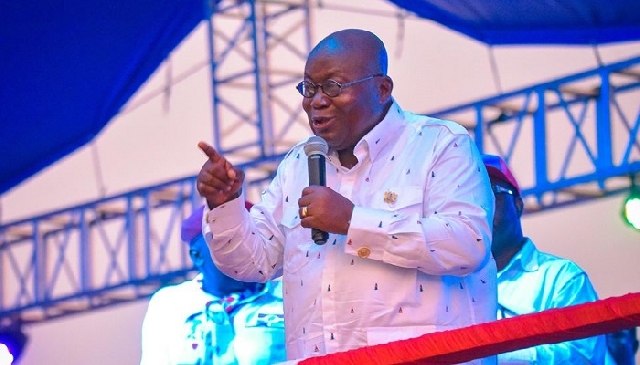 President Nana Addo Dankwa Akufo-Addo has disclosed that the government has secured a €155-million facility for the Rural Telephony Project being implemented by the Ministry of Communication.

The President disclosed this at the launch of a Rural Telephony Project at New Edubiase in the Ashanti Region on Wednesday, 4 November 2020.

The Rural Telephony Project forms part of efforts by the government to promote digital inclusion and reduce the gap in the digital divide by providing basic voice and data connectivity to underserved areas across the country.

Speaking at the launch of the project, President Akufo-Addo indicated that about 30 per cent of the country’s residents living in rural communities have no access to communications technology.

“Network connectivity in the 21st Century has become a basic necessity of life just like water or electricity. However, some 30 per cent of our country’s residents live in rural areas with little or no access to information and communications technology, that’s widening the digital divide,” President Akufo-Addo said.

President Akufo-Addo noted that the Rural Telephony Project will ensure that 3 million Ghanaians are connected to other parts of the country and the world in general.

He stated: “These sites will provide network coverage to over 300,000 communities and provide an opportunity to over 3 million people to connect to their relatives and friends, enabling these communities to be accessible for social, economic, health and educational engagements, not only with other parts of the country but also with the rest of the world.”

He indicated that the technology being used for the project was developed at a cost of 50 per cent savings on the cost of traditional cell sites.

“Government has secured a €155-million facility from the China Exim Bank to finance this telephony extension project. I’m reliably informed that the Huawei Rural Stark technology being used for this project was developed due to the incessant pressure from the dynamic minister for Communications,  the Honourable Ursula Owusu and it entails some 50 per cent savings on the cost of traditional cell sites. This makes the project both economical and financially feasible and will therefore generate good returns on investment.”

He further noted that the project will ensure growth in ICT in the country.

“The rural telephony project will also provide new areas for ICT growth in Ghana while raising substantially the level of ICT literacy especially during this COVID-19 era where the need for and demand for ICT skills has increased exponentially," said Mr Akufo-Addo.