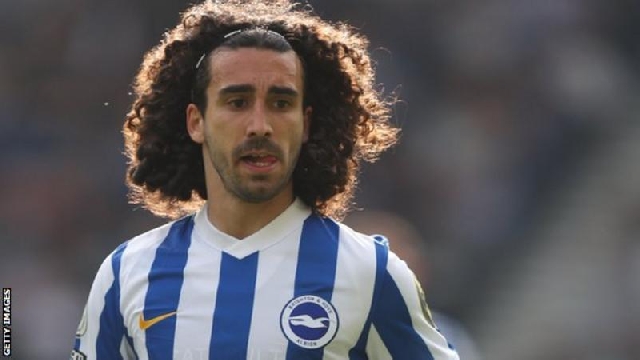 Chelsea have signed Spain defender Marc Cucurella from Brighton in a deal worth more than £60m.

The 24-year-old left-back, who scored one goal in 38 games in his only season for the Seagulls, has signed a six-year contract.

"I'm really happy. It's a big opportunity for me to join one of the best clubs in the world," said Cucurella.

"I'm going to work hard to be happy here and help the team."

A Barcelona academy graduate, Cucurella has won one senior cap for Spain and played for the under-23 side that won silver at the 2020 Tokyo Olympics.

Last month Brighton rejected a £30m bid from champions Manchester City for Cucurella, who handed in a transfer request after City expressed an interest.

"We did not want to lose Marc, but he wanted the opportunity of playing Champions League football with a view to accelerating his progress to Spain's World Cup squad," said Brighton manager Graham Potter.

"He had an excellent first season in the Premier League, deservedly winning both our player of the season awards, and has been an absolute pleasure to work with over the past 12 months."

Cucurella is the second big-money departure from Brighton this summer after midfielder Yves Bissouma joined Tottenham for £25m plus add-ons.

"We continue to work on and off the pitch, and we're delighted Marc will be a part of the present and future at Chelsea."

This summer Chelsea have brought in England forward Raheem Sterling from Manchester City for £50m, Senegal defender Kalidou Koulibaly from Napoli for £34m and midfielder Carney Chukwuemeka from Aston Villa for £20m.

They also signed 18-year-old American goalkeeper Gabriel Slonina for a reported £12m from Chicago Fire, where he will remain on loan until the end of the Major League Soccer season.

The England Under-19 international spent last season on loan at Huddersfield and scored an own goal in the 1-0 Championship play-off final defeat by Nottingham Forest.

"Levi has enormous potential and has already shown his ability last season in the Championship and with England at various age group levels up to under-21s," said Potter.

"He plays mostly at centre-back, but has also played on the left as a full-back, and he is a player who is comfortable on the ball."