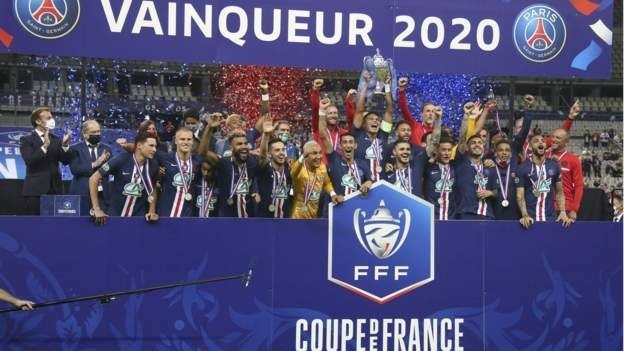 The men's and women's French Cup competitions have been suspended until 1 December after a surge in coronavirus cases and deaths in the country.

French President Emmanuel Macron has announced a second national lockdown until at least the end of November.

The top three tiers of men's football - Ligue 1, Ligue 2 and the National - and the women's top flight can continue, as can international football matches.

"The FFF decided to suspend all leagues, districts and national championships competitions National 3, National 2, Women's D2, the French Cup for men and women, and national youth championships (male and female) until Tuesday, 1 December," the FFF said in a statement.

"All matches that cannot be played during this period will be postponed to later dates, depending on the evolution of the health situation."

From Friday, people in France will only be allowed to leave home for essential work or medical reasons.

Covid daily deaths in France are at the highest level since April. On Wednesday, 36,437 new cases and 244 deaths were confirmed.

Speaking in the French parliament, Maracineanu said: "The coming weeks will be tough economically but also humanely. This is why I wanted to confirm to you that the continuity of the sport which is practised as a profession is today assured.

France are due to play Ireland in the Six Nations in Paris on Saturday, while the Paris Masters tennis tournament is also due to begin on Monday, with both events set to be played behind closed doors.

The 2019-20 Ligue 1 season ended in April during the first wave of the pandemic.

Meanwhile, football fans in Germany will again be banned from attending matches as part of new measures to combat rising coronavirus cases in the country.