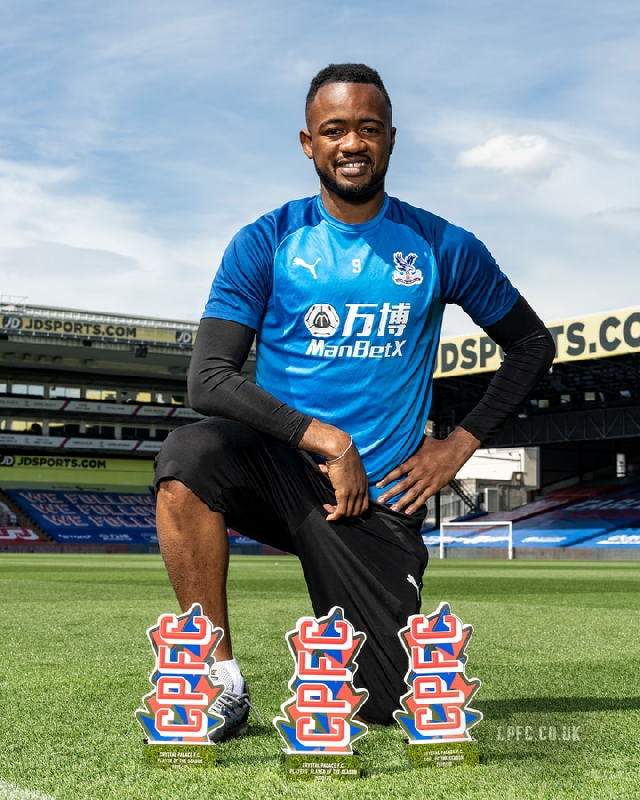 Ghanaian Crystal Palace attacker, Jordan Pierre Ayew, has been honoured with three accolades for his stellar performance in the recently-ended 2019/2020 Premier League campaign.

The awards ceremony was held on Tuesday, 28 July 2020 to honour Crystal Palace players who were outstanding throughout the season.

The Ghanaian international received the Crystal Palace F.C. Player of the Season award with the club’s fans naming the forward as their choice outshining everyone else.

Ayew, who scored nine times in 39 matches in all competitions this season, “received an impressive 37% of the total votes from almost 6,000 supporters,” the club has confirmed.

Goal of the Season

Ayew earned the Goal of the Season accolade as voted for by fans, and secured the trophy; amassing 70.1% of the votes to beat Wilfried Zaha v Chelsea (H) and his own effort v Aston Villa (H) by a mile.

The Boxing Day strike came in the 90th-minute against the Hammers, securing Palace three points in emphatic fashion.

It was Ayew’s second goal against West Ham across the campaign – with the frontman also netting after 87 minutes away in October.

Announcing Ayew’s victory on Palace TV's awards show, Crystal Palace captain, Luka Milivojevic, said: “I think Jordan’s goal against West Ham was one of the best because it was the last minute of the game. It was an important moment for us.

“His dribbling skills in that moment, what he showed was something you cannot see very often on the football pitches. The goal was top-class and I think that goal deserved to be the best goal of the season.”

In his acceptance speech, the Ghanaian striker shared, with great emotion, what the season and the club meant to him.

"I want to thank everyone at the football club; I want to thank the fans especially, they’ve been massive for us this season, for me, especially they’ve been massive. I’d like to thank all the people that supported me within the difficult moments that I had in my football career. When I have this type of award, I just think of my family and obviously of the fans. And one man that’s been so influential in my football career: that’s Pape Diouf. I lost him within the period of COVID and he passed away, I wish he were still here so I could present him this.”