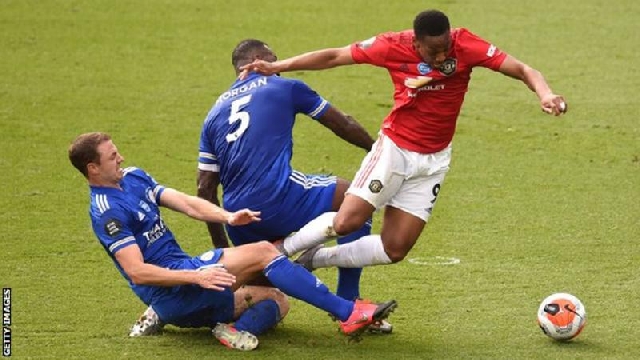 Manchester United secured a place in the Champions League at the expense of Leicester City with victory at King Power Stadium.

Ole Gunnar Solskjaer's side needed a point from this decisive final-day meeting to confirm a place in the top four - and break the hearts of the Foxes, who were in a Champions League spot for so much of the season.

Leicester needed victory once Chelsea took command at home to Wolverhampton Wanderers but their dreams were dashed as Bruno Fernandes scored a 71st-minute penalty after Anthony Martial tumbled under challenge from Wes Morgan and Jonny Evans.

Both sides had their chances, with Leicester City keeper Kasper Schmeichel saving well from Marcus Rashford in the first half and Jamie Vardy seeing a header glance off the frame of the goal after the break.

Leicester pressed but could not break Manchester United down and their misery was compounded when Evans was sent off against his former club for a wild, late lunge on Scott McTominay.

Manchester United confirmed the formalities seconds from time when substitute Jesse Lingard robbed Schmeichel and rolled the ball into an empty net.

It is a result that fulfils the usual minimum requirement of Champions League qualification for Manchester United.

But while Leicester City's fifth-placed finish is highly creditable and earns a place in the Europa League, this will undoubtedly be a huge disappointment and anti-climax after being in a position to reach the Champions League for so long.

It will be scant consolation for them that striker Vardy will claim the Golden Boot, as the Premier League's top scorer with 23 goals.

After Fernandes had made an impressive debut in a goalless draw at home to Wolves on 1 February, Manchester United stood 14 points adrift of Leicester City, who were third.

Fast forward to his decisive role in this victory that sees United qualify for next season's Champions League by taking that third place, and you can see the extent of his impact.

The Portuguese attacker - a mid-season signing from Sporting Lisbon in a deal that could eventually be worth around £68m - has provided the missing link for this Manchester United side.

He has built a bridge between midfield and a talented attacking array of strikers with his talent and his positive style, looking forward every time he receives possession.

Fernandes was not at his best here but he was the man who unlocked Leicester's defence as Martial won the crucial penalty, then performed his usual hop, skip and jump to send Schmeichel the wrong way and ease any lingering United nerves.

It capped a remarkable recovery for Manchester United - with credit also due to manager Solskjaer for guiding his side into the top four.

The scenes at the final whistle here showed the extent of Leicester City's bitter disappointment at being denied the footballing and financial prize that seemed theirs for the taking for so long.

Brendan Rodgers' side had started to lose their early-season sparkle even before the campaign was halted in March by the coronavirus pandemic - yet they were still in a powerful position as the finish line approached.

They have still had a fine season but there is no point glossing over this huge missed opportunity.

Rodgers is left to rue moments such as the inexplicable meltdown at Bournemouth, where they led at half-time only to lose 4-1.

The manager faces a big job to pick his players up and remind them of what they have achieved in returning to European football.

When they go into next season's Europa League, will they be without players such as Ben Chilwell, a target for Chelsea and reduced here to exhorting his team-mates from the directors' box as he was absent through injury?