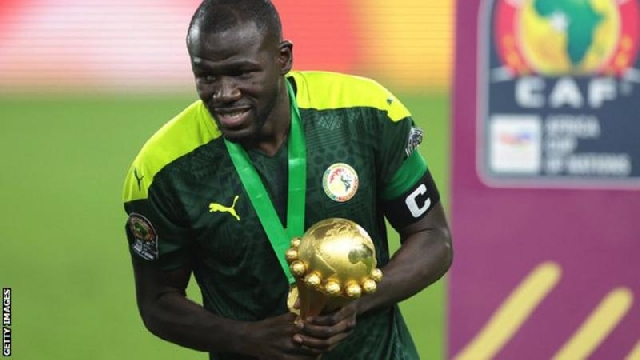 Kalidou Koulibaly captained Senegal to glory at the Africa Cup of Nations this year, but missed six Napoli games in the process

Napoli owner and president Aurelio de Laurentiis says the Italian club will avoid signing any more African players unless they agree not to play in the Africa Cup of Nations.

"Enough of African players, or they should give up playing in the African Cup of Nations. I won't be buying them any more for this reason," De Laurentiis told a Wall Street Italia show.

Koulibaly and Zambo Anguissa missed Napoli's 1-1 draw with Juventus in early January and the Coppa Italia defeat by Fiorentina, but the club then managed four league wins in their absence.

Koulibaly spent eight years at Napoli and responded to De Laurentiis' comments by saying it is important to "respect everybody".

"You cannot speak about African national teams like this," the 31-centre-back told BBC Sport.

"You have to have respect, and as captain of Senegal it is not a good way to speak.

"If he thinks that the team can play without African players, it's up to him. But I think not everybody has the same idea as him in the club, because I know their supporters and they don't think like this."

The timing of the Nations Cup - traditionally played in January and February - has led to repeated disputes with European clubs who are forced to release players in the middle of the season.

Former Arsenal and England striker Ian Wright said this year's tournament in Cameroon was "disrespected" by some negative media coverage in the build-up.

Napoli's only two Serie A titles came in 1987 and 1990 with a side inspired by Argentina great Diego Maradona, and De Laurentiis is taking a strong stance with his players in his quest to bring success back to Naples.

"We pay the salaries to send them around to play elsewhere in the middle of the league championship," the 73-year-old added.

"Or they sign a waiver that for Afcon and the championships in South America [the Copa America], I cannot make them available to participate."

The current rules of world governing body Fifa stipulate that players must be released for the Nations Cup despite its mid-season timing in Europe.

The next edition of the Nations Cup will be held in January and February 2024 in Ivory Coast, having been moved from its initial dates of June-July 2023 because of weather concerns.

The 2021 tournament was initially due to be staged in June and July last year, but similar concerns in Cameroon meant it was played at the start of this year.

Despite the departure of Senegal captain Koulibaly to the Premier League, Napoli still have three Africans on their books - having completed a permanent deal for Zambo Anguissa from Fulham in May.

But the club's biggest star and record signing is fast-rising Nigeria striker Victor Osimhen, who missed the continental showpiece in Cameroon because of injury.

The 23-year-old is the subject of transfer interest from top Premier League clubs but the Super Eagle insists he loves life in southern Italy, downplaying a pre-season spat with coach Luciano Spalletti as "nothing serious" on social media.

Injury may have limited Adam Ounas to 21 appearances and two goals in all competitions last season, but the Algeria international has a contract with Napoli until the end of June 2023.

'Clubs agreeing to too many games'

Meanwhile, a vocal De Laurentiis has criticised the fact that clubs were agreeing to more and more European games, with the Champions League starting an expanded format from 2024-25.

That comes despite the fact the European Club Association (ECA) has often expressed its "deep concerns" regarding player welfare and criticised a revamped calendar suggested by Fifa.

De Laurentiis has suggested a European tournament with the top clubs from the strongest five countries instead of the Champions League, Europa League and Europa Conference League.

"The world of football cannot self-manage because we do the puppet show for others," he said.

The Italian film producer also said he did not support the breakaway European Super League, which folded less than 48 hours after it was announced last year, as it was an elite club.

"You cannot create a super club of privileged members who invite others [to the league]. You need to democratically keep the door open for everyone," he added.

In 2016, De Laurentiis declared that agents were a "cancer" on the game and insisted players did not need them.