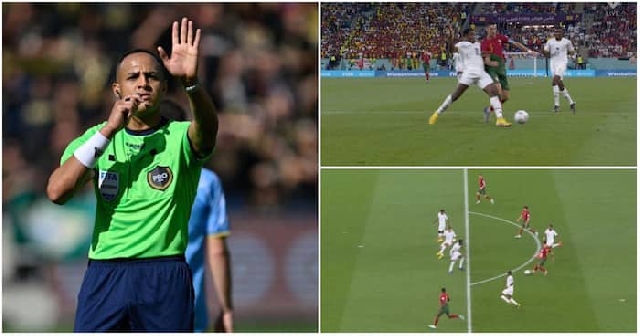 Social media is awash with allegations of racism against Ghana's national senior male team the Black Stars during their Qatar 2022 opener against Portugal, Thursday 24 November.

The 99-minute and five-goal thriller unfolded at the 974 Stadium in Doha, Qatar, Middle East.

The first half of the game was goalless.

In the 64th minute of the match, however, referee Ismail Elfath awarded a penalty to Portugal's Ronaldo. He had been challenged by Mohammed Salisu in the 18-yard box and had fallen. Efalth ruled it a foul.

The Ghanaian players protested but the match official was adamant.

The Video Assistant Referee (VAR) was not consulted.

Ronaldo eluded goalie Lawrence Ati-Zigi and gave his side the game's first goal.

The goal, however, has been received with mixed feelings.

The British Broadcasting Corporation's (BBC) Match of the Day Twitter account queried: "...should that penalty have been given in the first place?"

The response from App users was a unisonous: "No!"

Some fans hold Ronaldo dived and was not fouled.

Ghana's lead coach Otto Addo has said it was a corrupt decision on the part of referee Efalth. He called it a "special gift" from the match official to Cristiano Ronaldo.

Since final whistle for the game, social media has gone wild with allegations of racism.

Hashtag racism [#racism] is, at the time of publication, trending on Twitter.

Initially, half an hour into the game, Cristiano Ronaldo, had vigorously sent the ball into the back of the net against Ghana, but saw his goal spiked.

The Moroccan-born American match official Elfath ruled that Ronaldo had unfairly shoved off Alexander Djiku with his forearm, gaining undue advantage and the disallowed goal.

The Black Stars of Ghana will play Uruguay on Friday, 2 December.