Qatar close to elimination after defeat to Senegal 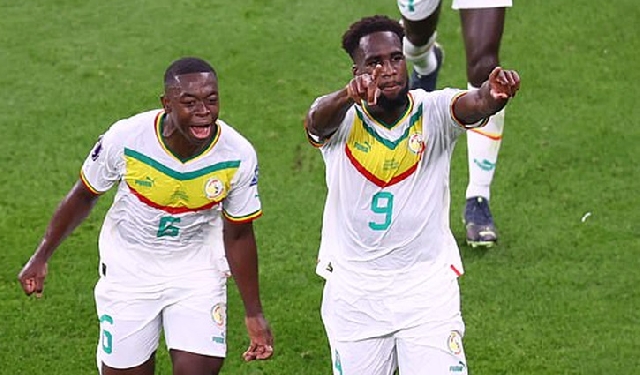 Qatar are on the verge of a group-stage exit in their home World Cup after Senegal condemned them to a second straight loss.

The Middle East side battled valiantly but will be out with a game to spare if the Netherlands avoid defeat against Ecuador later on Friday (16:00 GMT kick-off).

But African champions Senegal are up and running.

Looking to hit back in the second period, Qatar's hopes were dashed when former Bristol City striker Famara Diedhiou rose to flick in a glorious header just three minutes after the break.

Watford's Ismaila Sarr had an early chance on his 50th cap but struck into the side netting, while Idrissa Gueye of Everton's rasping drive went narrowly wide.

Qatar felt they should have had a first-half penalty when Akram Afif was bundled over in the box by Sarr, but referee Antonio Lahoz pointed only for a goal-kick, much to the anger of the home supporters.

Chelsea goalkeeper Edouard Mendy made stunning reflex saves to deny Almoez Ali and Ismail Mohamad, but he could do nothing about Mohammed Muntari's powerful header.

Qatar were searching for the equaliser, but Bamba Dieng stroked in to deflate the home following and leave their team bottom of the group without a point after two games played.

Qatar made history by becoming the first country from this region to host the World Cup, but are now staring at the unwanted record of becoming just the second home team to exit the competition at the group stage, after South Africa in 2010.

They need a huge favour from Ecuador, who beat them in the opening game, to salvage any hope of remaining in the tournament.

Felix Sanchez's men, who did not have a shot on target on their World Cup debut, were backed by a raucous section of supporters behind the goal.

Other men and women dressed in traditional attire filled the stadium at the start of their weekend, but went home disappointed as their side suffered back-to-back defeats.

Senegal's class told with their starting XI featuring 10 players who feature in Europe's top-five leagues, with the exception being Sarr of Watford.

But the story could have been very different had the referee pointed to the spot for Sarr's challenge on Afif, but he left the locals outraged by failing to award a penalty.

It proved crucial as Khoukhi's scuffed clearance allowed Dia to convert the opener, and Diedhiou's unstoppable header double the advantage on 48 minutes.

Qatar, though, showed good fight to hit back via Muntari's thunderous header, which sent the partisan crowd into raptures.

But any optimism for an equaliser was killed when Dieng finished off a swift move to seal Senegal's first victory in the group.

The Qatar players were applauded by their fans at the final whistle, but some hit the deck in regret knowing their prospects of reaching the knockout stage are all but over.