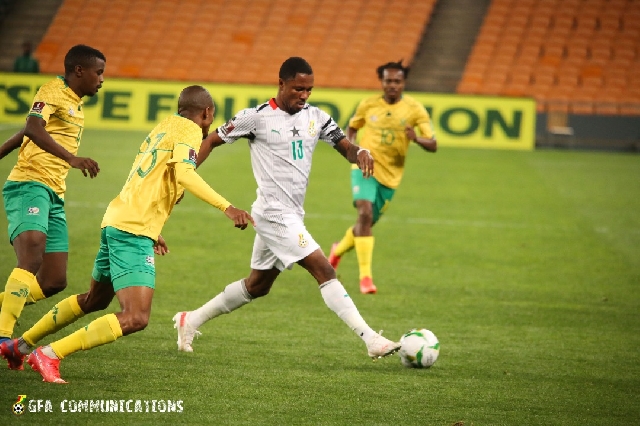 Striker BongoKuhle Hlongwane scored in the 83rd minute to beat the Black Stars – their first since August 2010. The win takes South Africa to the top of the table with 4 points from two matches in the on-going qualifiers.

Ghana looked unimpressive for the majority of the game after a stellar display in the first half. But the team fizzled out in the second half.

Ghana drops to the second spot with 3 points in the interim as Ethiopia hosts Zimbabwe on Tuesday.

Ghana Coach Charles Akonnor picked Fatawu Mohammed and Gideon Mensah to play at full back with Jonathan Mensah and Alexander Djiku in central defense. Emmanuel Lomotey partnered Mubarak Wakaso in midfield while Majeed Ashimeru played in the hole behind Andre Ayew with Yaw Yeboah and Joel Fameyeh operating on the flanks.

Percy Tau scored from a header eight minutes to end the first half following a sweet delivery from the flanks but it was ruled offside.

Ghana was forced to make a change in the 77th minute as Richard Ofori hobbled off for Lawrence Ati-Zigi.

The Black Stars were dealt a blow in the 83rd minute through an easy tap in by BongoKuhle Hlongwane after a defensive error.

The Black Stars will next play Zimbabwe in back to back games in November 2021.