Why Benitez's first Merseyside derby could be his most important 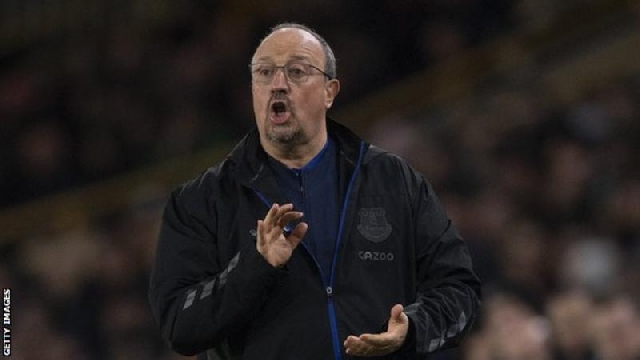 Rafael Benitez is a veteran of 14 Merseyside derbies from his time on the red side of the Liverpool divide, but his first in charge of Everton on Wednesday could be his most important.

Benitez, 61, will become the first manager since 1894 to take charge of both Merseyside clubs in a derby, though that achievement is likely to be far from his mind as his Everton side go into the game on a rotten run of form.

The Toffees are without a win in seven Premier League games and dropped to 14th in the table after Sunday's 1-0 defeat at Brentford.

The fans made their displeasure clear at the final whistle and the bookmakers make Benitez - only appointed in June - the favourite to be the next Premier League manager to lose his job.

Benitez's tenure got off to a difficult start before he had even signed a contract, with threatening banners protesting against his appointment left outside Goodison Park and near his home.

Some fans are still angry at the Spaniard for referring to Everton as a "small club" following a goalless derby at Anfield in February 2007, though he later insisted he was referring to the team's approach rather than Everton as a club.

Despite those reservations Benitez was given a warm reception before his first game against Southampton, suggesting the majority of Everton fans were prepared to give him a chance.

"The Everton fans weren't really happy about the idea of Benitez at all," said BBC Radio Merseyside Sport reporter Carl Woodward. "But I think as it took a while for the appointment to be confirmed, it helped Everton fans to warm to the idea.

"The majority said 'well he's now our manager, we have to back the manager of our club'."

'They need a bit of direction and accountability'.

Benitez's cause was helped by a bright start in which the Toffees won three out of their opening four matches, but things have tailed off spectacularly since.

Over the past nine games, Everton are bottom of the form table, scoring just six goals, conceding 16 and losing to two newly-promoted sides.

Benitez's tally of 15 points from his opening 13 games is also the third-lowest by an Everton manager in the Premier League era, with only Howard Kendall and Walter Smith earning fewer points from their first 13 matches in charge.

However, not all of the anger for recent results in being pinned on the manager.

Benitez has had to deal with a host of injuries to key players, including defender Yerry Mina, midfielder Abdoulaye Doucoure and forwards Dominic Calvert-Lewin and Richarlison.

He was also only able to spend £1.7m in the summer because the club risked falling foul of the Premier League's profit and sustainability rules, a result of years of wasteful transfer spending.

Owner Farhad Moshiri has spent about £500m on new players since taking over the club in 2016, but there has been little return from that investment.

There has also been a high turnover of managers, with Benitez the fifth permanent Everton boss in five years.

"If I was going to rank Everton's problems from first to last, Benitez would be near the bottom of the list," said Matt Jones of Everton podcast The Blue Room.

"They need a bit of direction and accountability. You have Farhad Moshiri the owner, Marcel Brands the director of football, Bill Kenwright the chairman and Rafa Benitez the manager. And no one really knows who is responsible for what."

Peter Mcpartland from Everton Fan Channel Toffee TV told BBC Radio 5 Live's Monday Night Club: "We are an absolute mess of a club. And it's not just Rafa Benitez, it's not just the director of football. It goes all the way to the top.

"I am really, really fearful that we will be the next Sunderland [relegated from the Premier League and then to League One].

"I look at the table and I really struggle to see how we don't finish in the bottom five or six this season."

The players have also come in for criticism, as was witnessed after the Brentford game on Sunday.

"With results not going well, the fans continue to be angry with the board. But they are also blaming the players for just not putting the effort in," said Woodward.

"That is something that has been levelled at them for a few seasons now - it doesn't matter who is managing the club, the players just don't fight for the shirt."

'Everton need a miracle to get a win'

Things do not look like getting any easier for Everton as they take on a buoyant Liverpool side who sit third in the Premier League after scoring a league-high 39 goals in 13 matches, more than double the Toffees' tally of 16.

Benitez can call on fond memories of this fixture - he has a fine record in derby matches from his time in the Anfield dugout. After losing his first encounter at Goodison in December 2004 he only lost one of the subsequent 11 Premier League meetings, with his only other defeat coming after extra time in an FA Cup fourth-round replay in 2009.

There was always plenty riding on those encounters, including 1-0 victories at Anfield in 2008 and 2010 that boosted the Reds' top-four hopes. But none look to be as significant as Wednesday's encounter, given the potential ramifications for his own future.

"Everton need a miracle to get a win," said Jones. "If they go 3-0 down before half-time and Goodison is half empty, Benitez might be spared anger because everyone has left and it's just apathy.

"But if it goes another way and the ground is full late on and they collapse, it could be tough for him to come back from."