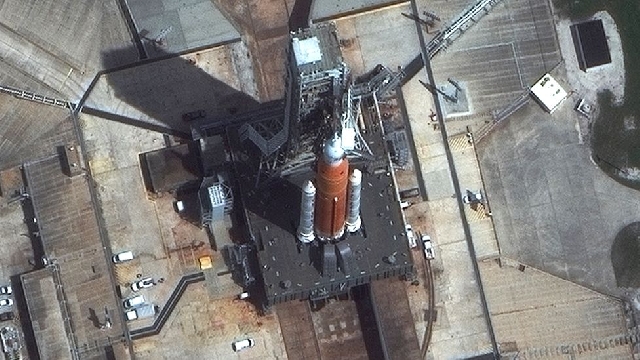 As seen from space: A satellite caught this view of the launch pad

The American space agency is counting down to the lift-off of its giant new Moon rocket - the Space Launch System.

SLS is the most powerful vehicle ever developed by Nasa, and will be the foundation of its Artemis project which aims to put people back on the lunar surface after a 50-year absence.

The moon mission will lay groundwork for flights to Mars in the 2040s.

Its job will be to propel a test capsule, called Orion, far from Earth.

This spacecraft will loop around the Moon on a big arc before returning home to a splashdown in the Pacific Ocean in six weeks' time.

Orion is uncrewed for this demonstration but assuming all the hardware works as it should, astronauts will climb aboard for a future series of ever more complex missions, starting in 2024.

"Everything we're doing with this Artemis I flight, we're looking at through the lens of what can we prove out and what can we demonstrate that will buy down risk for the Artemis II crewed mission," explained Nasa astronaut Randy Bresnik.

The US space agency has several opportunities over the next week to fly SLS-Orion, but it will want to take the option immediately in front of it.

The weather here in Florida is very dynamic at this time of year, with frequent electrical storms passing over the spaceport.

Indeed, the pad's lightning towers have been struck several times in recent days.

Early morning is when conditions are usually at their calmest, which makes Monday a great day to fly.

"Basically, the beginning of the launch window, or just after 08:30 in the morning, has an 80% chance of favourable weather," said meteorologist Melody Lovin.

However, if technical issues push the launch to the back of the allotted two-hour window, the probability drops to 60%, because of the likely encroachment of showers. The rocket is not permitted to lift off in the rain.