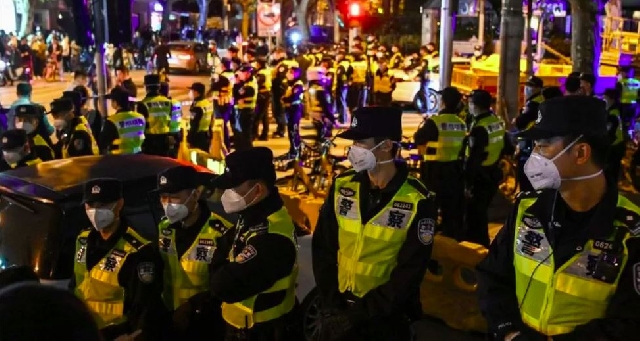 China's protests against Covid restrictions which erupted over the weekend appear to have died down, as authorities begin clamping down.

A heavy police presence has been reported in several cities, and some gatherings were quelled or failed to materialise.

Reports have emerged of people being questioned and their phones searched.

But overseas Chinese have continued protesting, in at least a dozen cities across the world.

Last weekend's demonstrations had grown after a fire in a high-rise block in Urumqi, western China, killed 10 people on Thursday.

It is widely believed residents could not escape the blaze because of Covid restrictions, but local authorities have disputed this.

As a result, thousands took to the streets for days, demanding an end to Covid lockdowns - with some even making rare calls for President Xi Jinping to stand down.

But on Monday, planned protests in Beijing did not happen after officers surrounded the assembly point. In Shanghai, large barriers were erected along the main protest route and police made several arrests.

On Tuesday morning, police could be seen in both cities patrolling areas where some groups on the Telegram social media app had suggested people should gather again.

A small protest in the southern city of Hangzhou on Monday night was also quickly stopped with people swiftly arrested, according to social media footage verified by the BBC.

But in Hong Kong, dozens of protesters gathered in the centre of the city and at the campus of the Chinese University of Hong Kong, in a show of solidarity with demonstrators in mainland China.

Many also gathered outside Chinese embassies in major cities around the world like London, Paris and Tokyo, and universities in the US and Europe.

One expert suggested that local protests were not likely to die down any time soon, saying they were likely to "ebb and flow" because people were "not being called out to the streets in a controlled fashion... they move between social media and the street".

But Drew Thompson, a visiting senior research fellow at the National University of Singapore, added that it was also important to note that Chinese police had "tremendous capacity... [and] the ability of China to control these protests going forward... is quite high".

Reports also claim that police were stopping people and searching their homes to check if they had virtual private networks (VPNs) set up, as well as apps like Telegram and Twitter which are banned in China.

One woman told the AFP news agency that she and five of her friends who attended a protest in Beijing had received phone calls from police, demanding information about their whereabouts.

In one case, a police officer visited her friend's home after they failed to answer their phone, and asked whether they had visited the protest site, stressing that it was an "illegal assembly".

It is unclear how police might have discovered the identities of those in attendance.

Police have also detained journalists covering the protests in recent days. News agency Reuters said one of its journalists was briefly detained on Sunday before being released.

BBC journalist Ed Lawrence was also held for several hours while covering a protest in Shanghai on the same night. UK Prime Minister Rishi Sunak said his detention was "shocking and unacceptable", adding that Britain would raise concerns with China about its response to the protests.

Censorship has gone into overdrive on Chinese social media platforms since the weekend's protests, to stop people from seeing and discussing them.

Tens of millions of posts have been filtered from search results, while media are muting their coverage of Covid in favour of upbeat stories about the World Cup and China's space achievements.

It's a vastly different scene on Western social media platforms, which some Chinese people have taken to share information including advice for protesters to avoid arrest.

One account on Instagram - a platform which is blocked in China and accessible only through a VPN - published a "safety guide for friends in Shanghai and across the country" and included tips like wearing dark-coloured clothing for anonymity and bringing along goggles and water in the event that tear gas is fired.

The Chinese government has not acknowledged the protests or responded in any formal way.