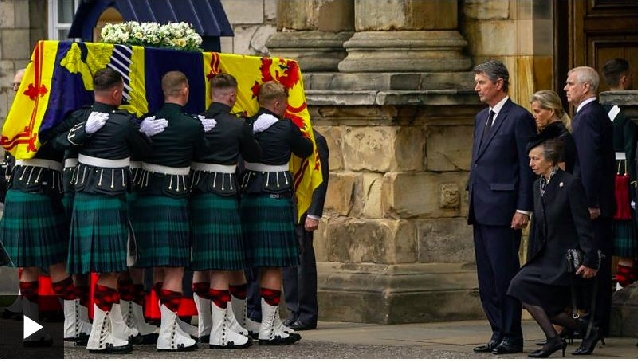 The Queen’s coffin travelled from Balmoral to Edinburgh

Queen Elizabeth II's coffin has been brought to Edinburgh following a six-hour journey from Balmoral.

Mourners lined the streets as the hearse travelled from Aberdeenshire to the Palace of Holyroodhouse, where her coffin will rest overnight.

A respectful silence fell as people waited for the procession to pass by before they burst into polite applause and cheers.

He will travel up to Scotland on Monday and will be joined by members of the Royal Family as he accompanies his mother's coffin to the cathedral in the Scottish city.

The Queen's cortege left her home at Balmoral at around 10:00 BST, winding through Aberdeen and Dundee among other villages and towns, on its way to Edinburgh.

Her coffin will lie under vigil in St Giles' Cathedral on Monday before heading to London ahead of her funeral on Monday 19 September.

In Ballater, Aberdeenshire, near Balmoral, flowers were thrown into the road ahead of the cortege by mourners.

Down the road in Aboyne, pipes played as a hush fell over the village and the procession passed by, with one voice saying "you're on your way now".

In a field near Aberdeen farmers paid tribute by lining up their tractors.

As the cortege drove through Edinburgh city centre silence fell before there was applause from the crowd that had gathered. 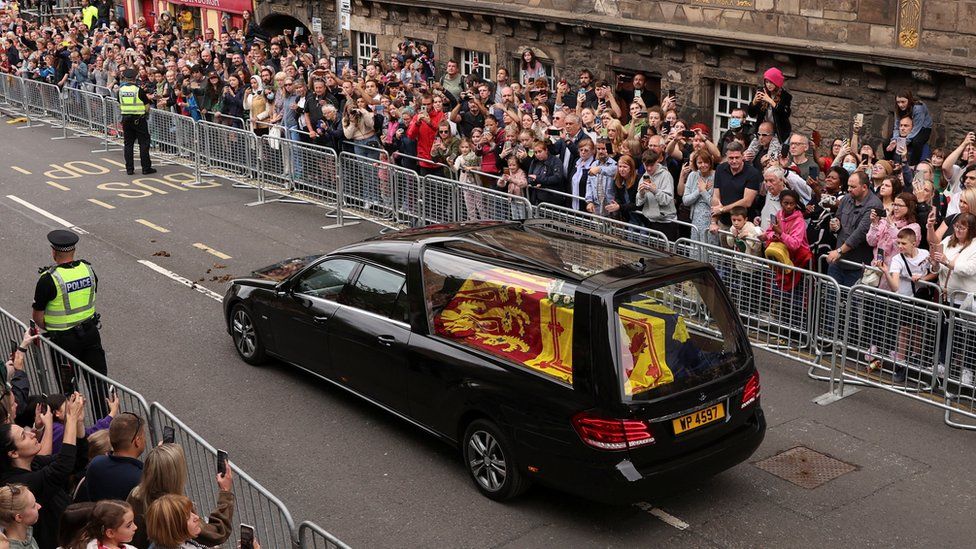 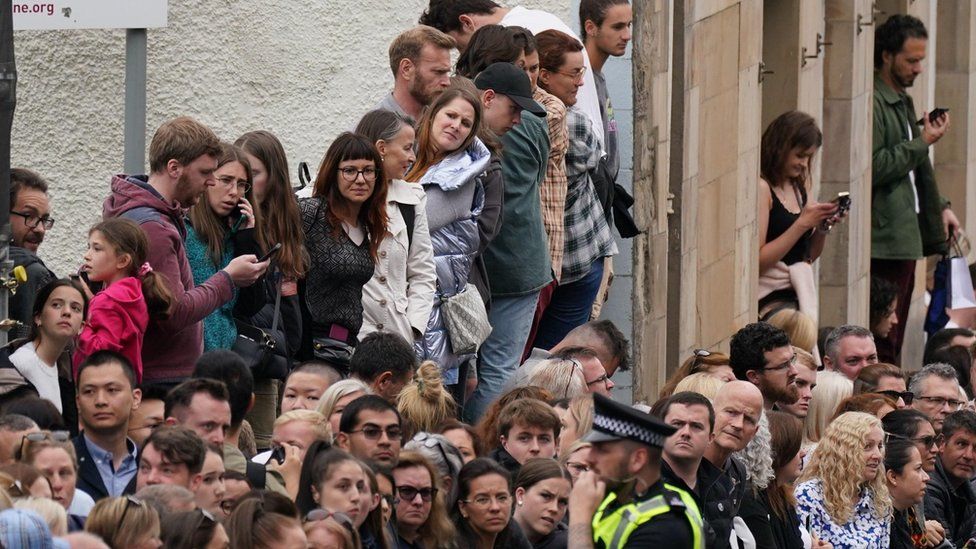 People lined streets in cities, towns and villages as the sombre journey continued 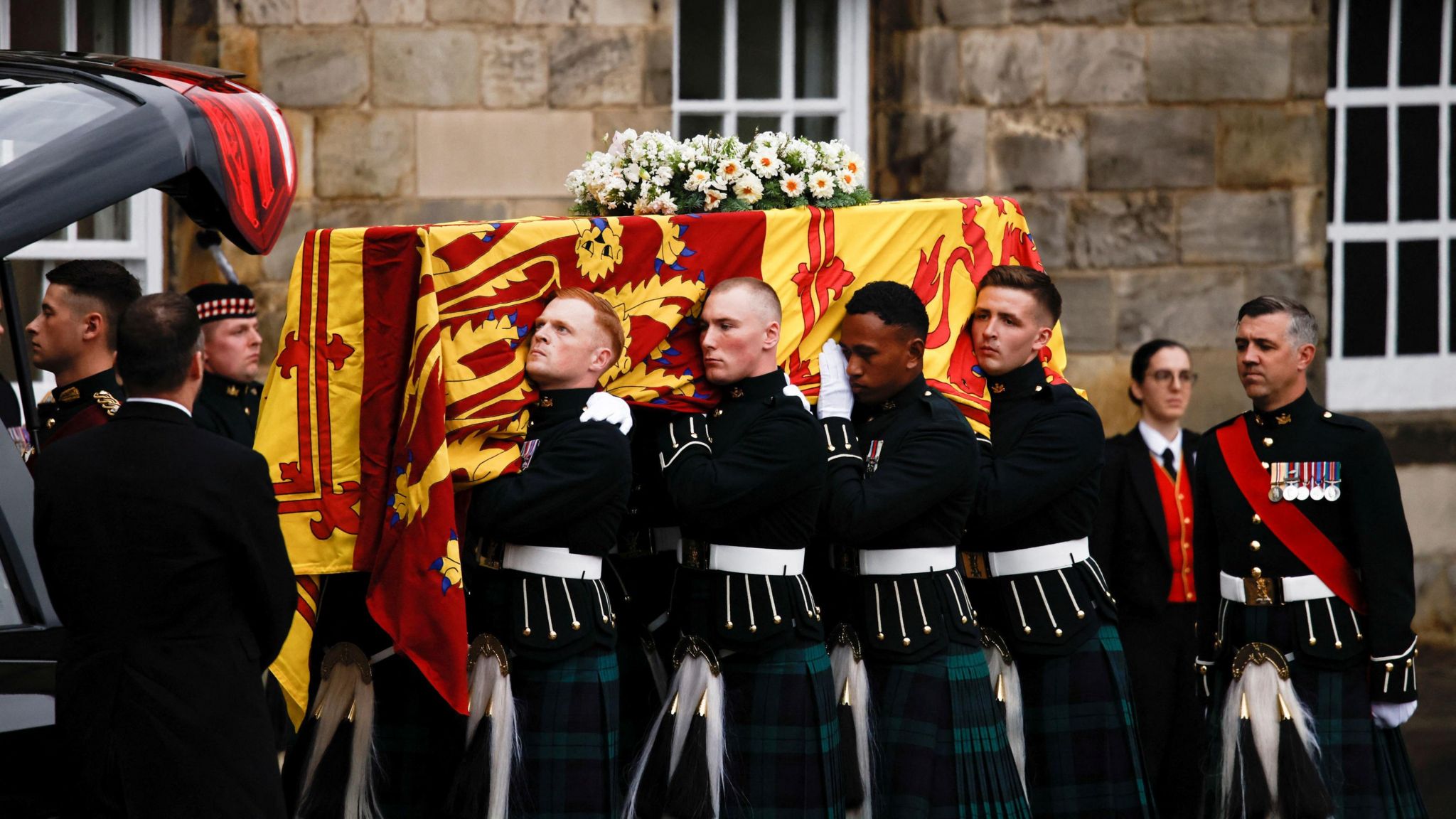 The Princess Royal, Princess Anne, travelled in the second car of the cortege on the 175-mile journey, accompanied by her husband, Vice Admiral Sir Tim Laurence.

She curtsied as her mother's coffin was carried into Holyroodhouse - the monarch's official residence in Scotland - where it will lie at rest in the throne room.

The Duke of York and Earl and Countess of Wessex, who were there to receive the coffin, also bowed and curtsied respectively, alongside palace staff.

The country is in a period of national mourning until after the Queen's funeral next Monday.

A series of constitutional and ceremonial events will take place over the coming days following her death aged 96 on Thursday.

Earlier at the start of the journey, six gamekeepers from her Balmoral estate placed the Queen's oak coffin into a hearse before she left Balmoral, her beloved private Scottish estate, for the final time.

The wreath on top of the coffin featured some of the Queen's favourite flowers, all cut from the estate - white heather, dahlias and sweet peas, phlox and pine fir.

When the cortege reached Ballater, Aberdeenshire - the closest village to Balmoral - flowers were thrown in the road by mourners, many of whom regard the Queen and the Royal Family as neighbours. The coffin will remain under continuous vigil for 24 hours at St Giles' Cathedral, with the public able to pay their respects.

A service will be held at the cathedral in the evening.

The following day, Princess Anne will accompany her mother's coffin as it travels by plane from Edinburgh Airport back to Buckingham Palace, via RAF Northolt in north-west London. 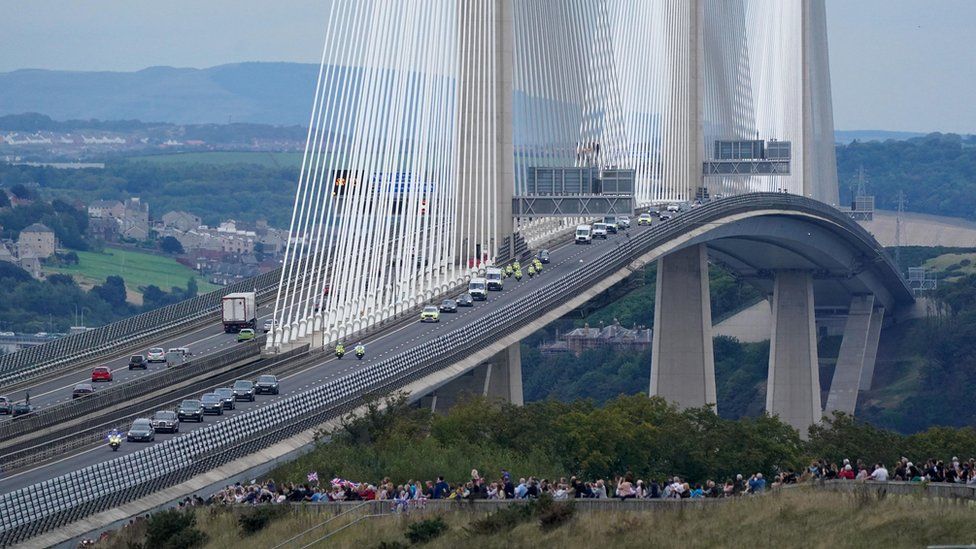 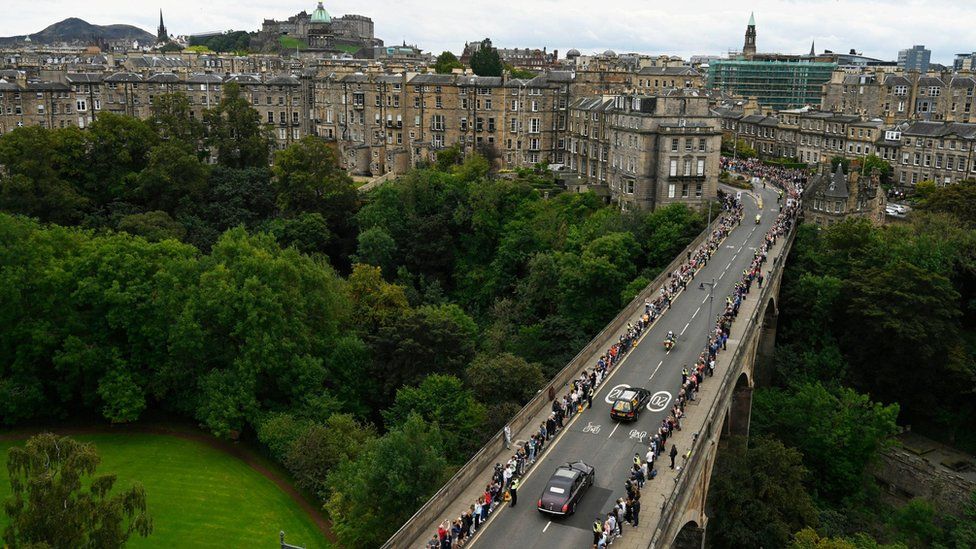 The cortege's six-hour journey came to an end in Edinburgh

Among those in the crowds was Dillion Hay, who was visiting Edinburgh from Bangor in Northern Ireland, said he had a flight to catch later but had come to pay his respects while he could.

"I've actually found it emotional on behalf of my nanny, I rang her and she was in floods of tears," he said.

Linda McKichen, 60, arrived four hours early to see the cortege and said it was a "heart-breaking" occasion.

"It's like losing my mum. She's never not been in my life. This is a historic event, we'll certainly never have another queen like her," she said.

Meanwhile, in Windsor, thousands gathered in the town to pay tribute to the Queen.

Roads were closed, as floral tributes and cards continued to be placed outside the castle gates.

And in Green Park, near Buckingham Palace, thousands more floral tributes were placed in memory of the Queen. 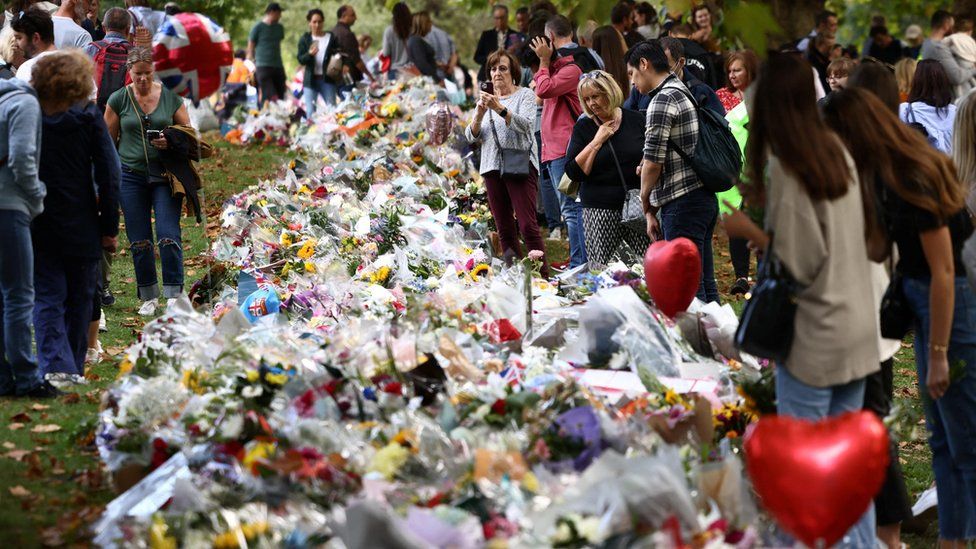 While he became king the moment his mother died, at a meeting of the Accession Council at St James's Palace on Saturday, he was formally confirmed in the role.

The proclamation has now been read in Scotland, Wales and Northern Ireland, as well as in other parts of England and in overseas territories. 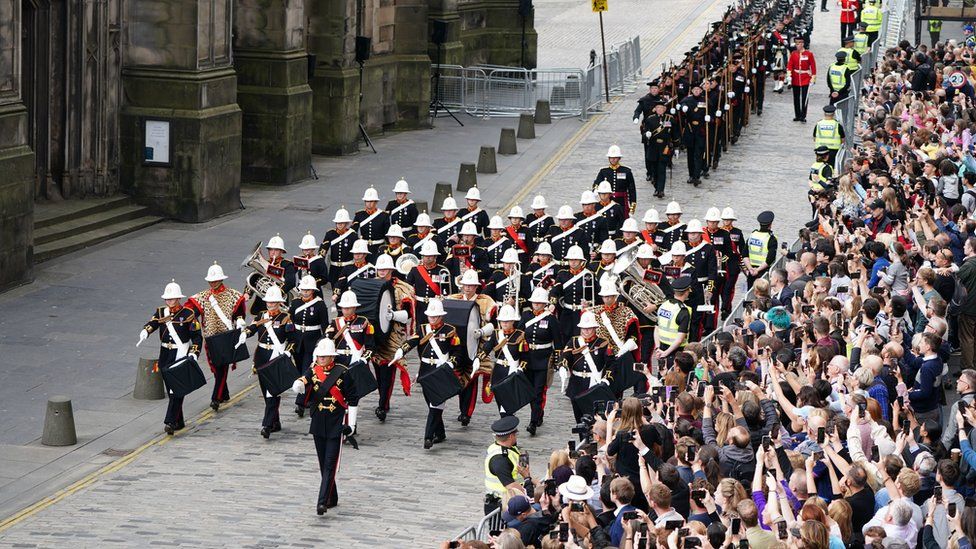 Crowds gathered in the Royal Mile in Edinburgh for the proclamation

The King was cheered by hundreds of well-wishers as he travelled to Buckingham Palace from nearby Clarence House to carry out audiences with representatives of the Commonwealth.

There he met with the Commonwealth Secretary General Baroness Scotland - who publicly represents the association of 56 countries with historical ties to the UK. 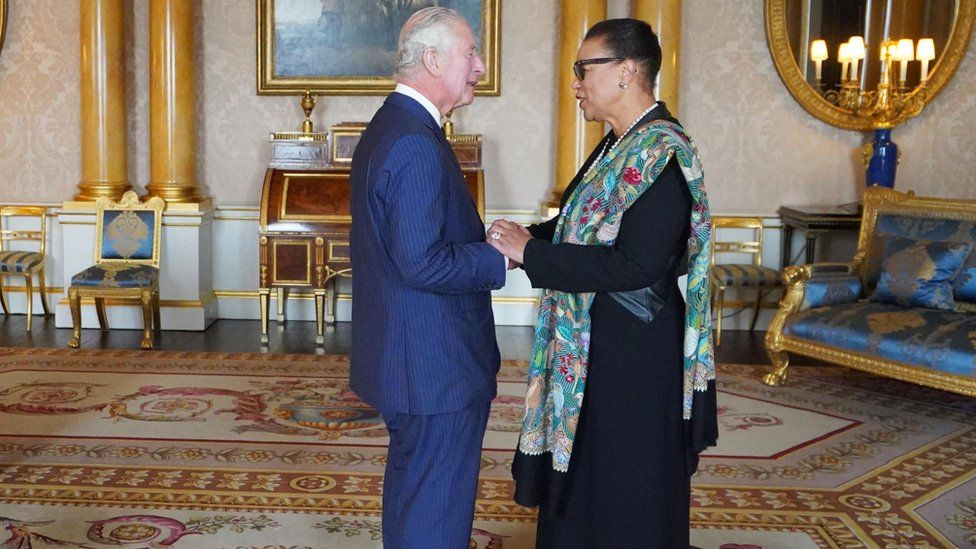 Later, the King hosted a reception for High Commissioners - ambassadors - from the 14 Commonwealth realms where he is also head of state, before meeting with the Dean of Windsor.

On Monday, he will visit Westminster Hall where both Houses of Parliament will express their condolences, before beginning his first trip around all four nations of the UK as monarch by flying to Scotland.

In his new role as Prince of Wales, Prince William spoke of his honour at being asked to serve the Welsh people in a call with First Minister of Wales Mark Drakeford.