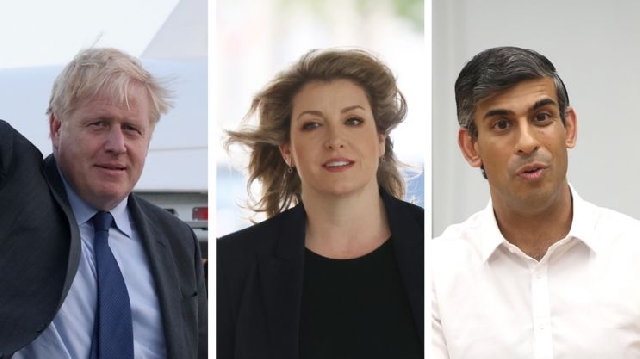 Conservative MPs hoping to succeed Liz Truss as prime minister are racing to find backers before a Monday deadline.

Ms Truss resigned on Thursday just six weeks into the job, making her tumultuous premiership the shortest in British history.

Candidates to replace her need support from at least 100 colleagues, limiting the contest to three.

Former PM Boris Johnson has not ruled out a dramatic comeback, months after being forced out after a Tory revolt.

Rishi Sunak and Penny Mordaunt, who stood unsuccessfully in the contest to replace him, are also seen as likely contenders to run again.

So far, the BBC estimates that Mr Sunak has the most MPs declaring their support, with 43, to Boris Johnson's 19 and Penny Mordaunt's 15.

But it is a fast moving situation, and others, such as Defence Secretary Ben Wallace, former Home Secretary Suella Braverman and International Trade Secretary Kemi Badenoch, are thought to be considering bids.

Tom Tugendhat, who stood in the last contest held over the summer, and Michael Gove have said they will sit this one out. Chancellor Jeremy Hunt has also ruled himself out.

Candidates have until 2pm on Monday to find 100 backers. If three reach the threshold, MPs will knock one out in a ballot on the same day.

MPs will hold an "indicative" ballot of the final two, with the winner then decided in an online vote of party members to finish on Friday next week.

Business Secretary Jacob Rees-Mogg has been encouraging MP colleagues to nominate Mr Johnson, and tweeted his support earlier alongside the hashtag "Boris or bust".

If Mr Johnson did make a comeback it would be unprecedented in British political history, coming a matter of weeks after being forced out by his own MPs after a string of scandals.

Polling suggests he remains popular with Tory members, but another tilt at the leadership could prove divisive among Tory MPs, some of whom have said they would quit politics if he came back.

Mr Johnson has been on holiday in the Caribbean. His father Stanley told ITV he understood his son was on a plane back to the UK, but would not be drawn on whether he would stand.

But fellow Tory John Baron said it would be impossible to serve in a new Johnson government, and suggested he would become independent instead.

Opposition parties are calling for a general election to decide who should be the next prime minister.

Labour leader Sir Keir Starmer has also called on Ms Truss to give up the £115,000 a year allowance she will be entitled to as a former prime minister.

"She's done 44 days in office, she's not really entitled to it, she should turn it down and not take it," he told ITV.

The next general election is not due to take place until at least 2024 and, at this stage, it looks unlikely that date will be brought forward.

Labour has been way ahead of the Conservatives in recent opinion polls.

CONTENDERS: Who could be the next prime minister? ANALYSIS: The rise and fall of Liz Truss PROFILED: The man who sees off Tory PMs IN FULL: Liz Truss's resignation speech

In response, she sacked her chancellor, Kwasi Kwarteng, and appointed Jeremy Hunt to the post hours later to try to calm the markets.

On Wednesday, her home secretary, Suella Braverman, resigned and a chaotic night with accusations of bullying during a vote in the House of Commons followed, sealing her fate.