US midterms: Republicans narrowly win back the House 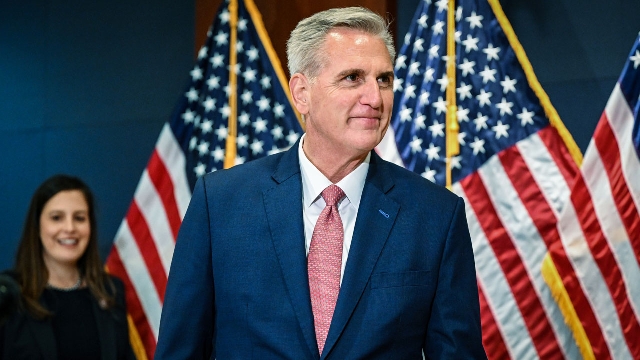 Kevin McCarthy, the Republicans' leader in the House of Representatives, has been nominated by his party to be the new House Speaker

Republicans have secured the 218 seats needed for a majority in the lower chamber of Congress a week after the midterm elections, the BBC's US partner CBS News projects.

While the party's margin in the House of Representatives is razor-thin, it is enough to stall President Joe Biden's agenda for the next two years.

Kevin McCarthy, the Republicans' leader in the House, celebrated the result.

But Democrats will retain control of the upper chamber, the Senate.

The new Congress will convene in January.

The Republicans - who had hoped to win back control of both chambers - underperformed expectations in last week's midterms.

But they won the seat they needed for their House majority on Wednesday when California's 27th district went to incumbent Mike Garcia.

The Republican party is now projected to win between 218-223 seats in the 435-seat House, according to CBS.

But with votes in several cliff-hanger races still being counted, their majority may not be clear for days or even weeks.

Mr McCarthy, who was picked by rank-and-file Republicans on Tuesday to be their nominee to replace Democrat Nancy Pelosi as the next Speaker of the House, said the chamber had been "officially flipped".

In order to be elected Speaker, the House Republican minority leader must win over majority support from the 435 members of the full House.

But Mrs Pelosi signalled she would not relinquish the gavel quietly, vowing in a statement on Wednesday night that her party would exert "strong leverage over a scant Republican majority".

The first woman to hold the post, Mrs Pelosi, 82, said nothing in her press release about whether she planned to stay on as minority leader, amid speculation in Washington about her future.

Can fractious Republican caucus pull together?

Nancy Pelosi was able to accomplish a considerable amount with just a nine-seat margin, but she has proven to be singularly gifted at wrangling recalcitrant Democrats. There's no guarantee Republicans, who run the gamut from moderates in suburban battleground districts to Freedom Caucus conservative hard-liners, will be equally co-operative with their party's leadership.

A majority is a majority, however, and assuming Republicans can pull together to elect a speaker when the full chamber votes in January, they will reap the rewards of their midterm victory. House rules give the party in charge control over which legislation gets votes and which languishes in limbo. Republicans will also run all the House committees, with their sweeping oversight and subpoena powers.

While the fractious Republican caucus may not agree on much, they will be able to stop Joe Biden's agenda in its tracks and force showdowns over federal budget priorities.

For a party that has watched Democrats rack up a string of legislative successes over the past two years, that by itself will be a significant achievement.

President Biden congratulated Mr McCarthy and offered to work with Republicans to deliver results for Americans.

"As I said last week, the future is too promising to be trapped in political warfare," said the Democratic president.

"The American people want us to get things done for them. They want us to focus on the issues that matter to them and on making their lives better."

Mr McCarthy's party had hoped that the president's relatively low popularity, stubborn inflation, and the fact that congressional maps were redrawn by Republican-led state legislatures would add up to midterms victories for them.

On Tuesday night, the ex-president formally announced a third bid for the White House in 2024 from a ballroom at his Mar-a-Lago estate in Florida.

In Washington on Wednesday, Mr McConnell was renewed as Senate minority leader, fending off a challenge from fellow Republican Rick Scott of Florida. 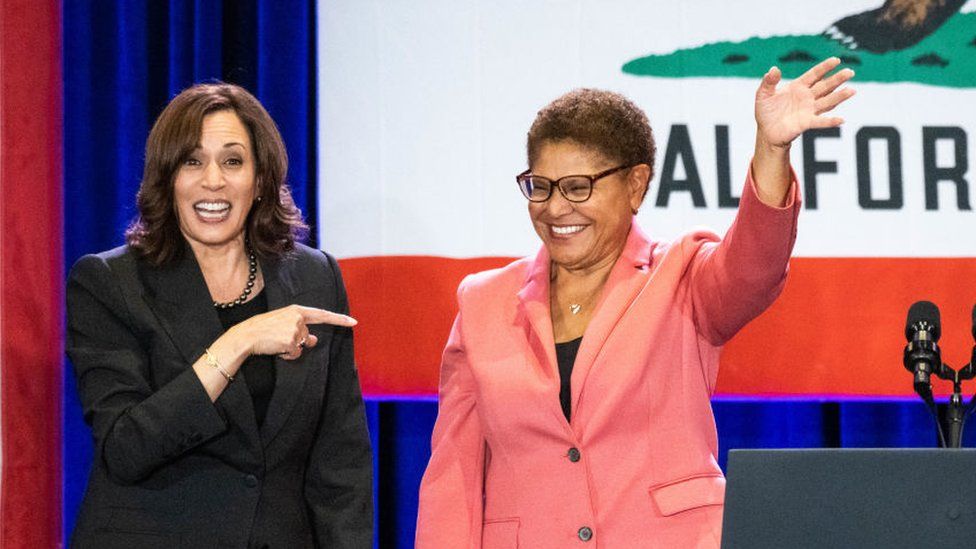 Non-congressional results are still trickling in more than a week after election day.

On Wednesday, congresswoman Karen Bass was projected to win the race to be the next mayor of Los Angeles, the second largest city in America, after defeating billionaire businessman Rick Caruso.

The Democrat will become the first woman to hold the office and the city's second ever black mayor.