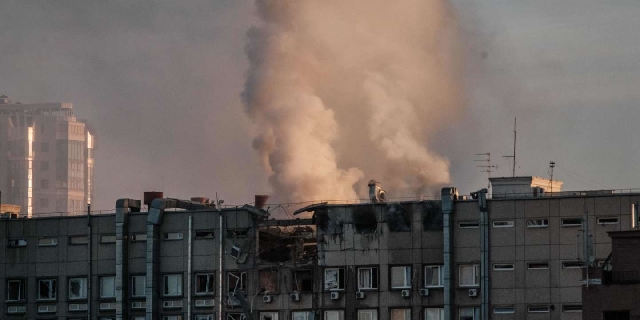 Smoke rises above Kyiv after a reported drone attack

At least three explosions have been heard in the Ukrainian capital Kyiv, after air raid sirens went off.

It comes a week after the capital was hit by several Russian missiles at rush hour, in a nationwide attack which left 19 dead.

Writing on the Telegram social media site, Mr Klitschko said they were in the Shevchenkivskiy district, which was hit by several strikes last week.

He said rescuers were on site, and told residents to stay in air raid shelters.

Mr Yermak said on Telegram that the attack was from kamikaze drones, and that Ukraine needed more air defence systems "as soon as possible".

The drones, reportedly supplied to Russia by Iran, can hover for hours before diving into targets and exploding. Ukraine says Russia has used them before.

Iran denies supplying them to Russia, and Russia has not commented.

Russian President Vladimir Putin said last week's strikes were in retaliation for the bombing of a key bridge linking Russia to occupied Crimea, which he blamed on Ukraine.

It was the first time during the war that the centre of Kyiv had been directly targeted.

Earlier this week, Mr Putin said there was no need for more large-scale strikes on Ukraine.

Most designated targets had been hit, he said, adding that it was not his aim to destroy the country.