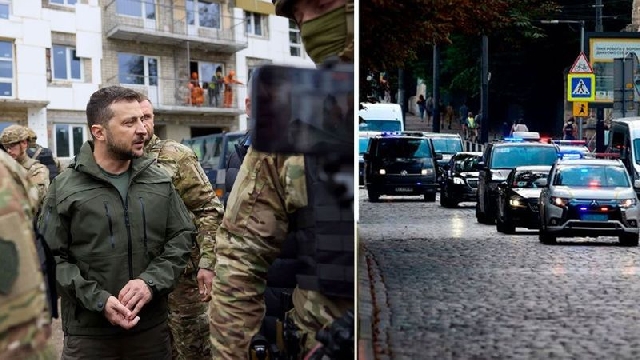 A passenger car is said to have collided with a vehicle carrying Mr Zelensky as his motorcade passed through Ukrainian capital, Kyiv

The President of Ukraine, Volodymyr Zelensky, has been involved in an accident according to his spokesman.

A passenger car is said to have collided with a vehicle carrying Mr Zelensky as his motorcade passed through Ukrainian capital, Kyiv.

Via a 1:22 AM (22:22 GMT) Facebook statement, spokesman Sergiy Nikiforov informed the public.

“In Kyiv, a passenger car collided with the car of the President of Ukraine and escort vehicles.

“Medics accompanying the President provided the driver of the passenger car with emergency aid and transferred him to an ambulance.

“The president was examined by a doctor, no serious injuries were detected. The law enforcement officers will investigate all the circumstances of the accident.”

The accident did not deter president Volodymyr Zelensky from his nightly televised address, video of which was posted shortly after the accident.

In the address, he stated he had just returned from the area around Kharkiv, adding “almost the entire region is de-occupied” after a quick counteroffensive to displace Russian troops.

“It was an unprecedented movement of our soldiers — the Ukrainians once again managed to do what many thought was impossible,” he also said.

Mr Zelensky was not seriously injured in the accident.