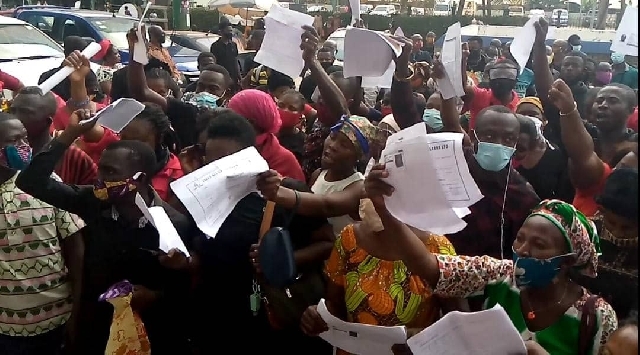 Members of the Coalition of Affected Savings and Loans Customers have confirmed to Class Business that some of them have received the full payment of their locked-up deposits in cash while some are yet to get theirs as promised by the government.

According to the Chairman of the affected customers, Mr Kofi Sarpong, the majority of their members who could not receive their money had some infractions on their payment claims, hence the delay and difficulty in paying them.

Thousands of depositors on Wednesday, 16 September 2020 trooped to the various branches of Consolidated Bank Ghana (GCB), across the country, to receive their outstanding claims in cash.

This was after the government released some GHS3.56 billion to the Receiver to facilitate the payment.

Speaking to Class Business' Pious Kojo Backah, Mr Sarpong said: “Some [of our members] have been paid and some have not been paid".

“Those who have not been paid, the majority of them are having one or two challenges and then some have also been paid but they’ve not received the message simply because sometimes, some of them, their phone numbers are wrong, the information they gave to the receiver is inaccurate".

“And to be honest the Receiver has set offices across the country where you can go and do the verification.

"When you get there and they check their system and you’ve been paid, they’ll give you CBG account number and then you go and withdraw your money…

“But unfortunately, we have some members, they’ve filled the forms alright, they even have copies of their form but yet their names are not on the receiver’s system.

Such people, Mr Sarpong noted, “can call CBG or the Receiver’s call service number or they can visit their office and they will do their best to go through their files if they can find copies.”

He, however, said there are some customers who have not been paid anything at all because they are awaiting verification.