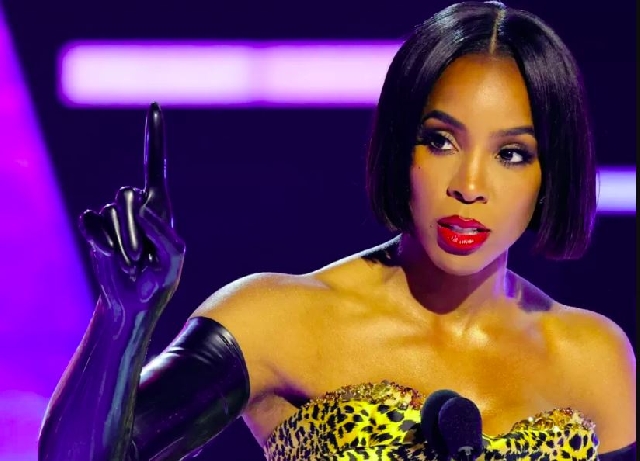 Kelly Rowland asked the audience at the American Music Awards to "chill out" after they booed Chris Brown's victory in the best male R&B artist category.

Brown has been a divisive figure ever since he pleaded guilty to assaulting then-girlfriend Rihanna in 2009.

He did not attend Sunday's AMAs after a planned tribute to Michael Jackson was cancelled at the last minute.

Rowland, accepting the award on his behalf, seemed surprised by the audience's reaction.

"Excuse me... chill out," she said as cameras panned to show the audience, some of whom were booing and making other unclear remarks.

Rowland then continued: "But I wanted to tell Chris, thank you so much for making great R&B music and I want to tell him thank you for being an incredible performer.

"I'll take this award [and] bring it to you. I love you. Congratulations. And congratulations to all the nominees in this category."

Brown had been due to honour the 40th anniversary of Michael Jackson's blockbuster Thriller album at Sunday's ceremony in LA, performing hits including Beat It, Billie Jean, Wanna Be Starting Something and Thriller.

No reason for the cancellation was given. Brown himself was taken aback, posting a video of his rehearsal with the caption: "U serious?"

"Would've been the [biggest] AMA performance but they cancelled me for reasons unknown," he added in the comments.

Artists who did perform at the show included Imagine Dragons, Carrie Underwood and Pink - who gave a poignant rendition of Grease's Hopelessly Devoted To You in tribute to Olivia Newton John, who died last month.

Lionel Richie was given the Icon Award, honouring his legacy of hits with the Commodores and as a solo artist.

He was given the prize by fellow Motown artist Smokey Robinson, who joked that he first knew the singer as "the guy with the biggest afro in the Commodores".

Taking the stage, Richie thanked his family and made a point of speaking directly to the "young superstars" in the room.

"God has given you a light. That light is special, that light is only given to a few," he said.

Stevie Wonder and Charlie Puth then celebrated his discography in a head-to-head piano duel, performing Three Times a Lady, Easy, All Night Long (All Night), Say You, Say Me, Brick House and Jesus Is Love.

They rounded off their set with a star-studded version of We Are The World - the charity single Richie co-wrote with Michael Jackson for Ethiopian famine relief. They were joined on stage by Ari Lennox, Muni Long, Melissa Etheridge, Jimmie Allen, Yola, Smokey Robinson and, eventually, Richie himself.

Taylor Swift was the night's biggest winner, taking home all six of her nominations, including the night's top prize - artist of the year.

"I have the fans to thank essentially for my happiness," said the singer. "I cannot express how unbelievable it is to me that I still do this and that you still care."

She also won album of the year for Red (Taylor's Version) - a new version of her 2012 album that re-recorded to reclaim ownership of her music, after her former record label sold her master tapes to a hedge fund.

"I cannot tell you how much my re-recorded albums mean to me, but I never expected or assumed that they would mean anything to you," she said. "So I can't thank you enough for caring about this album that I'm so proud of."

Swift now has a lifetime total of 40 AMAs, extending her lead at the most successful artist in the history of the fan-voted awards ceremony.

The singer, who is bisexual, dedicated her award to the "queer community at large", and paid tribute to the victims of a fatal shooting at a gay club in Colorado on Saturday night.

"On the heels of what happened at Club Q in Colorado Springs, I want to remind everyone how important queer visibility is and how important our community is.

"And I want to direct your attention to organizations like GLAAD and The Trevor Project for what you can do right now... Thank you for holding the space - I'm holding it for you too."

Harry Styles won best male pop artist and pop song of the year, for As It Was; while Korean pop group BTS took the best duo/group prize for the fourth year in a row,