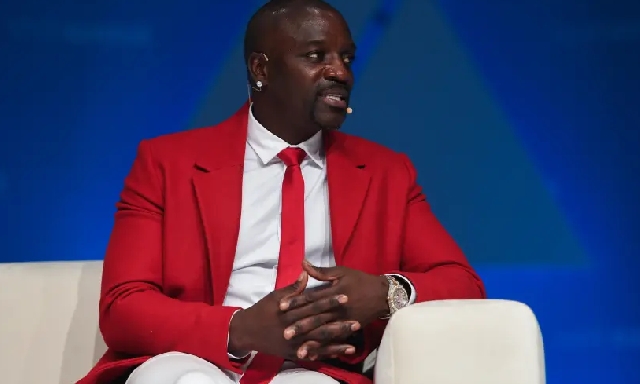 Akon on stage at a cryptocurrency conference in Lisbon, Portugal (Photo credit: WIKIMEDIA)

Senegalese-American musician Akon refused to condemn Kanye West's antisemitism and continued to express support for him despite West's threatening Jews, denying the Holocaust and praising Hitler.

West, who now goes by Ye, has continued to make headlines for rampant antisemitic comments both live and on social media. While many celebrities have spoken out condemning his comments, some have expressed continued support, either for Ye himself or his views.

Since the rapper came under fire for threats of violence to the Jewish population, dining with known white supremacists, and most recently praising Hitler and his ideas, he has also received support from fellow public personalities who have either made similar comments or outwardly supported him.

NBA player Kyrie Irving and The View host Whoopi Goldberg both recently made statements that have attempted to back up Ye's beliefs. Now, Akon has joined in the clamor.

Akon, "Smack That" rapper, and owner of the record label Konvict Muzik, told Sky News presenter Anna Jones that he would continue to support Ye despite offensive comments in an interview on December 2.

His reason for the continued support, he said, is that "[West]'s comments don't personally affect me."

In the Sky News interview, the musician initially seemed shocked when informed by the host that Ye had been banned from Twitter. "Wait, Elon banned him?" he replied, just before expressing his support for personal opinions - no matter who could be harmed in the process.

Akon thinks people should not take antisemitic comments "too personally"

"I think people will always have a specific opinion. If we get to a place where we close our minds to other people's opinions, it doesn't allow us to get to better know each other... know our mindsets," Akon said.

"We should just open up our minds and let things play out... better understand the situation so that we can come up with a better solution for it." When pressed about whether or not the comments troubled him, he said “I think sometimes when someone is offended, they just lash out in defense, or lash out to make that person feel the same offense that they felt. And I think when you take negative and apply a response negatively, you will only get negative back. Don’t take things too personally yet until you understand the situation.”

His remarks have come under fire, so much so that he turned to social media to correct what he felt was a misunderstanding.

"I clearly do not agree with Kanye's remarks about Hitler," he wrote. "I am simply saying that everyone should have the right to their own opinion. Doesn't mean we will always agree."

In the interview, Jones probed Akon by reiterating his comments that he did not agree with Ye's offensive statements - before asking if he would continue to back him. Without hesitation, he answered, "Yeah! Because I am a backer of the right to believe what you want to believe!"

Akon followed up by saying that if he were to engage in a conversation with Ye, he would express his opinion and support Ye's choice to possibly have a change of heart.