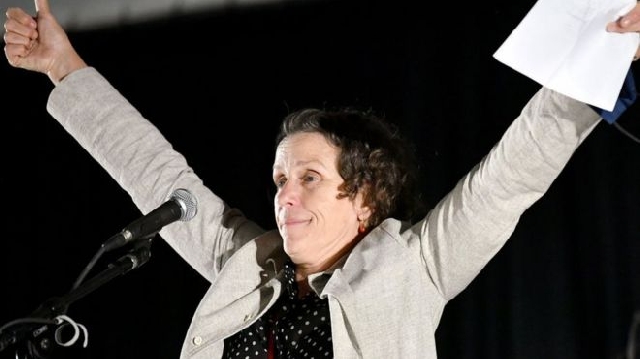 Frances McDormand's new film Nomadland has moved into pole position for next year's Oscars after becoming the first movie to win the top prizes at both the Toronto and Venice film festivals.

The drama, about a community of elderly idealists roaming the United States in worn-out vans, bagged the People's Choice Award in Toronto on Sunday.

The past eight winners have gone on to get an Oscars best picture nomination.

The Toronto win came a week after the film scooped the Golden Lion in Venice.

Past winners of the Toronto prize, which is voted for by audience members, include best picture winners Green Book, 12 Years a Slave, The King's Speech and Slumdog Millionaire.

And the past three Golden Lion victors have gone on to be nominated for the top Academy Award, including The Shape of Water, which won best picture in 2018.

Star and producer McDormand has previously won the Oscar for best actress twice herself - for 1997's Fargo, and for 2018's Three Billboards Outside Ebbing, Missouri.

Nomadland has been described by Variety as a "tender ode to American independence", while The Hollywood Reporter called it "a unique portrait of outsider existence".

Meanwhile, The Guardian said McDormand had given "the performance of her career", and BBC Culture said the film was "overflowing with humanity and tenderness".

The film was directed by Chinese-born, UK-educated, US-based Chloe Zhao, who may now be tipped to become only the second woman to win the best director Oscar.

Both runners-up in Toronto were also directed by women. One Night in Miami, about the 1964 meeting of Cassius Clay, Malcolm X, singer Sam Cooke and NFL star Jim Brown, earned second place on the same night its maker Regina King won an Emmy Award for acting in Watchmen.

The Oscars race has a long way to go. The coronavirus pandemic has meant fewer films have been screened and released this year, and the 2021 Academy Awards have have been pushed back by two months to April 25, to allow more movies a chance to compete.

The Toronto International Film Festival took place mainly online this year, along with a handful of drive-in and limited-capacity indoor screenings.