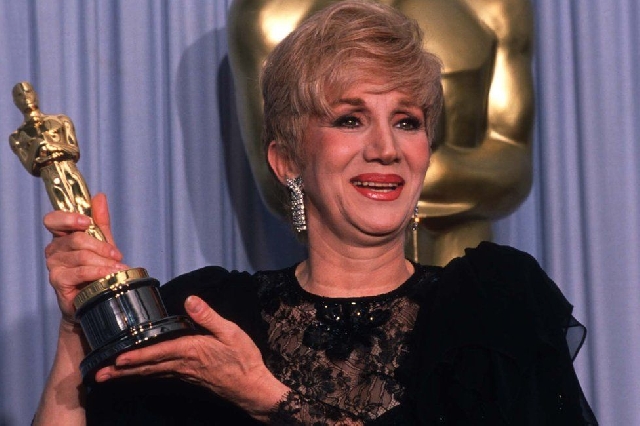 US actress Olympia Dukakis, who won an Oscar for her role in the 1987 romantic comedy Moonstruck, has died aged 89, her family have announced.

Her brother wrote she was "at peace" after suffering ill health.

Dukakis had a long and distinguished career in theatre, both as a performer and as a director.

But in her 50s she starred in a series of hit comedies on screen, including an award-winning turn as Cher's mother in Moonstruck.

That run - in the late 1980s - also included roles in Steel Magnolias, Working Girl and Look Who's Talking.

Other key roles were as a secondary school headteacher in 1995's Mr Holland's Opus and as a transgender landlady in the TV series Tales of the City, whose fourth series premiered on Netflix in 2019.

"After many months of failing health she is finally at peace and with her [husband] Louis."

From stage to screen

Olympia Dukakis was born in 1931 in Lowell, Massachusetts to Greek immigrants. Her cousin Michael was Democratic candidate for in the US presidential election, losing to George HW Bush.

Dukakis studied performing arts at Boston University, moving to New York in the late 1950s. She starred in dozens of plays on and off Broadway, as well as directing and teaching.

In 1961 she met actor-producer Louis Zorich. She had been cast as a married woman in a play and Zorich auditioned for the part of her husband. He didn't get it - but they got married for real the following year.

Dukakis had several roles on the big and small screen but it was Moonstruck that propelled her to stardom and won her a Best Supporting Actress Oscar.

Playing an eye-rolling, interfering Italian matriarch, in one stand-out scene she tells her 37-year-old on screen daughter Cher "your life's going down the toilet".

Despite the Oscar, and critical acclaim, she said she was taken aback, not considering the part one of her more important roles.

"All of the attention I was getting was lovely, of course, but I was more than a little confused about why it had come at this point, and with this role, which, to my mind, was not the greatest part I had ever played," she said.

Looking back on her long career in a recent interview, she said she was encouraged by how things have improved for women.

"I think things are finally moving in the right direction, both for women and for minorities. We are far from reaching our goal but there's a forward movement that's real and strong," she told the Irish News.

"You're seeing more women as directors and decision-makers and that's a great thing. I'm happy that I've lived a long enough life so I could witness the growth that has occurred."